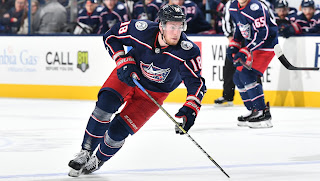 After all of the shenanigans that happened last night in the Tampa Bay vs Columbus game, a Pierre-Luc Dubois trade seems inevitable. After some lazy, 20% effort shifts from the star center, Head Coach John Tortarella benched Dubois for the second and third period, plus overtime, where the Blue Jackets lost. It had been reported that Dubois wanted out of Columbus before he signed his two year, $10 million extension during training camp, and that has been confirmed by Tortarella. While I could write a couple of paragraphs on why I hate everything John Tortarella has done with this situation, I decided to have more fun with this article, because ranting on Torts should be saved for the members of the Blue Jackets after he pulls off a stunt like this. So, here is five potential Dubois trades. A lot of the potential suitors are based off of insider Pierre Lebrun's tweet from earlier today.

The Blue Jackets can still contend, so I think that any Dubois trade will have a solid player going back to Columbus. While they get two wings in this trade, Drouin makes up for the offense talent lost. He had 15 points in 27 games last year, with 53 in the season before. Drouin also has four assists in the first five gams of 2020-21. He's played center before, but the results were mixed. Byron kills penalties and scores more than you'd think. The 2nd round pick makes up for the gap between players from both sides. Columbus could squeeze a first out of Montreal. These teams aren't afraid to trade top-six players with each other, as shown by this offseason's Max Domi for Josh Anderson deal.

I'm all on the Wild train. Kirill Kaprizov looks like the real deal, so now he just needs a center. Victor Rask isn't really who you want playing a budding star. Dubois would be a much better option. Dumba has been rumored to be on the market for what feels like years now. He is signed for three more years at a $6 million cap hit. Kukan would be Dumba's replacement in Minnesota, and while the Blue Jackets may not want to give him up, having a right side of Seth Jones, David Savard and Dumba on defense would be amazing.

3. To Winnipeg with Andrew Peeke and a 2022 3rd rounder for Patrik Laine and Jack Roslovic.

This is easily the biggest deal that is plausible. Both Laine and Dubois want out of their cities, and we know that Roslovic does. Roslovic is still an RFA, and is a Columbus native. In this deal, the Blue Jackets get a dynamic scorer in Laine, who they'll need to extend after the season. They'd need to sign Roslovic immediately, and they would get a hometown kid who can be a third line center. Peeke is a 22 year old former 2nd rounder on the taxi squad right now. He had good numbers in the AHL last year and played in 22 NHL games. The Jets lack defensively, so getting a defenseman back here makes sense.

4. To the New York Rangers for Ryan Strome, Tony DeAngelo, Filip Chytil and a 2020 4th round pick.

Dubois in New York is terrifying, and he would be the center for former Blue Jackets teammate Artemi Panarin. The Rangers currently have Strome centering Panarin, but Dubois is a big upgrade. They probably want to move on from DeAngelo, who is not good defensively, and is very controversial. The Blue Jackets may not take him either. Chytil is 21 and is a former first round pick. He would fill in exactly where Roslovic would if they choose to go the Winnipeg route. Overall, the Rangers' main subtraction here is Chytil, but a third line center, a position he would never be able to move up from with Mika Zibanejad and Dubois above him, is easily replaceable.

5. To Florida for Owen Tippett, Frank Vatrano and a 2021 first round pick.

You could be able to sway me to say that either the Panthers or Blue Jackets would say no to this deal. The Panthers brought in some former Blue Jackets last year under new GM Bill Zito, formerly the assistant GM in Columbus. This connection, plus reuniting with some former teammates like Anthony Duclair, Markus Nutivaara, Alex Wennberg and Sergei Bobrovsky could make Dubois want to play in Florida, and no state tax doesn't hurt. Of course, that condition remains for all of these deals. Tippett, who is a part of the starting lineup in Florida, is a dynamic scorer at age 21, and is getting a chance now after scoring in both the AHL and OHL. Vatrano is a solid middle-six winger who scored 16 goals last year. Florida needs a second line center, and Dubois would be perfect, and is worth giving up those two and a first.