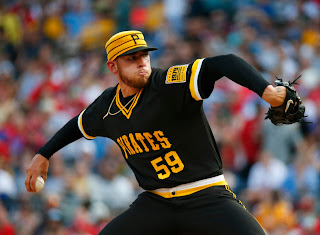 This offseason has been very boring, but thankfully the Padres have given us some excitement. First it was the acquisitions of both Blake Snell and Yu Darvish in the same day, and while Musgrove isn't on that level, he's still a really good pitcher. Musgrove struck out 33.1% of batters in 2020, with an average exit velocity against of 85.1 and a .197 xBA. Musgrove has an amazing curveball and slider, as both pitches had whiff rates over 50%, with an xBA of .120 or lower. Behind Snell, Darvish and Dinelson Lamet, Musgrove may now be baseball's best fourth starter. The Padres give up a lot of assets, but no top-100 prospects, and they still have a deep farm system.

With this deal, the Pirates are testing dangerous waters. This could be comparable to two of their previous deals, when Tyler Glasnow went to Tampa Bay and Gerrit Cole went to Houston. Ironically, Musgrove was acquired in the trade for Cole. Overall, they make a good portion of the San Diego farm system theirs. Head is the most notable of the group. MLB Pipeline ranked him as San Diego's 7th best prospect. Head was a 3rd round pick in 2019, and played 32 minor league games that year. The next best prospect is Cruz, who was 17th. He will turn 22 next week, and he has good numbers in a small sample size of minor league games. The one player the Pirates will receive with MLB experience is Bednar, who was previously San Diego's 20th prospect. He has struggled as part of the bullpen in stints in 2019 and 2020. He has had a successful minor league career, with a 2.70 ERA and a 12.4 K/9 over four seasons. The Pirates opted to get Endy Rodriguez, the Mets 14th best prospect, over the MLB caliber Joey Lucchesi. Rodriguez has mostly caught in two minor league seasons, but he can also play first base and corner outfield. The one prospect that wasn't ranked top-30 in a team's organization is Drake Fellows. Fellows is a six-foot-five starter who was drafted in the 6th round in 2019 out of Vanderbilt.

The Mets have reportedly been in the market for a 5th starter, with Corey Kluber being an option before he signed with the Yankees. They currently have Jacob deGrom, Carlos Carrasco and Marcus Stroman, with Noah Syndergaard rehabbing from Tommy John surgery. While David Peterson looks like a suitable fifth starter, and so does Steven Matz from time-to-time, the Mets wanted more depth. They get Lucchesi, who is just entering his prime. His 100 ERA+ in 2019 shows that he was exactly a league average pitcher. The analytics show that, as he isn't really bad at anything, or great at anything. His strong suit is his change-up, a pitch he only threw once in three appearances in 2020, which may be why he struggled. In 2019, the pitch had a .183 average against with a 38.6 whiff percentage. Giving up a top 15 prospect in the system does seem like too much, considering Lucchesi barely participated last year, and his best season is just average.