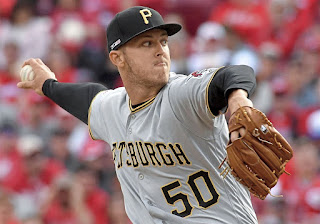 The New York Yankees have acquired RHP Jameson Taillon from the Pittsburgh Pirates in exchange for RHP Miguel Yajure, RHP Roansy Contreras, OF Canaan Smith and IF Maikol Escotto.

The guy selected second overall in 2010, between Bryce Harper and Manny Machado, Taillon has had a career riddled with injuries. In the few years where he has been healthy, Taillon has been effective. He had a 3.20 ERA in 32 starts in 2018, his one full season. He has had Tommy John surgery twice and has survived cancer. Most of 2019 and all of 2020 were missed because of that second surgery. The Yankees need a better rotation behind ace Gerrit Cole, and Taillon and Cole are good friends from their time in Pittsburgh. The Yankees have followed a high risk, high reward path to fixing the rotation, signing Corey Kluber a few weeks ago. Taillon has a plethora of effective pitches, including his fastball, slider and curveball. All three of them had whiff rates around 27% in Taillon's seven starts in 2019. The team had a full 40-man roster before signing Kluber and Taillon, as well as DJ LeMahieu. Both Yajure and Contreras were on the 40-man, so Taillon and Kluber have a spot, and they will need to clear one more spot. While the number of prospects they give up is high, none of them had a place in the team's future. As the club tries to stay under the luxury tax, a cheap starter like Taillon helps. He is only owed $2.25 million for 2021, with one extra year left of arbitration.

The Pirates haven't had a particularly fun offseason, as a big part of their core has left. Josh Bell, Joe Musgrove and now Taillon have been dealt within the last month. Next could be a reliever like Kyle Crick or Richard Rodriguez. As they look to build up their farm system, the Pirates get a ton of young players here. The headliner is Yajure, who MLB Pipeline ranked as New York's 15th best prospect. He pitched well in three relief appearances last year. Also in their top 30 was Contreras (number 19) and Smith (number 21). Escotto was signed out of the Dominican Republic in 2018, and is still a teenager.

Yajure, 22, struck out eight batters with one earned run allowed in seven innings for the Yankees in 2020. In his minor league career, Yajure has a 2.47 ERA with 246 strikeouts and a 1.135 WHIP in 291.2 innings. Keep in mind that Yajure only pitched in 11 AA innings and no AAA innings.