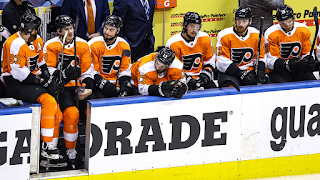 Of all the weird things that happened in the hockey world last year, the Flyers becoming the top seed in the Eastern Conference was odd. They are a good team, and they rode a hot streak into the stoppage, but seeing them seeded higher than Boston and Tampa Bay was unexpected. The Flyers made it to game seven of round two versus the Islanders, but were absolutely dominated in that game, and for a lot of the series. The team is looking to build on what happened last year, with a pretty similar squad going in.

One Move I'd Make: Trade away Shayne Gostisbehere.

After two great seasons in a row, Claude Giroux took a step back in 2019-20, scoring 21 goals with a still respectable 53 points in 69 games. But it was in the postseason where the Flyers captain received the most scrutiny, has he scored just one goal with seven assists in 16 games. No one confuses Jakub Voracek for a goal scorer, as his career high in goals in 23. But, he still had a down 2019-20, with 56 points, which is his second lowest total in the past seven seasons. Both Giroux and Voracek are aging, with Giroux set to turn 33 next week, and Voracek sitting at 31 years of age. Sean Couturier is the definition of a two-way center, as he scored 22 goals with 59 points last year, and spent a lot of time on the penalty kill, had a 56.5 CF%, and finally won the Selke trophy. The leader in goals and points for the Flyers last year was Travis Konecny, who scored exactly 24 goals for the third consecutive season, and had a career high 61 points in a career low 66 games. After signing a questionable seven year deal, Kevin Hayes may have proved that the signing was a mistake, as his 41 points was the second lowest total of his career. Hayes did perform when it mattered, with 13 points in 16 playoff games. James van Riemsdyk had 21 assists in 66 games, the exact same numbers he posted in 2018-19. The main difference was his goal total, which fell down to 19 from 27. He scored twice in the playoff, and at times was a healthy scratch. Oskar Lindblom made it all the way back from cancer to play in the final two postseason games for the Flyers. While people remember the recovery, they forget about how effective Lindblom was before his diagnosis. He scored 11 goals in 30 games, and he had a 54.4 CF%. 20 year old Joel Farabee became a regular for the Flyers last year, and he scored eight goals with 21 points in 52 games. He scored three goals in 12 playoff games. 2017 first rounder Morgan Frost turned professional after lighting up the OHL. Frost had seven points in 20 NHL games, and 29 points in 41 AHL games. A line of Lindblom, Frost and Farabee would be a really nice kid line for the Flyers if they can produce. Last year, the Flyers brought in Tyler Pitlick, Derek Grant and Nate Thompson, who are all gone. Scott Laughton could move down to the fourth line, but that is questionable, considering he was an effective third line center last year. Laughton scored a career high 13 goals with 27 points in only 49 games, and he killed penalties, won face-offs and produced in the playoffs, with nine points in 15 games. Michael Raffl has spent time in the top-six, and he scored four goals in nine playoff games. He only had eight goals in 58 regular season games, and he seems like a nice fit for the fourth line. Nic Aube-Kubel scored seven goals in 36 games with 82 hits as a rookie, and he got into 13 playoff games. The forwards are pretty set, unless Nolan Patrick wants to change that. The 2017 2nd overall pick missed all of 2019-20 with concussion issues, but was skating in camp today. Patrick's first two seasons were similar, with 13 goals in each, and 30 and 31 points in 73 and 72 games played. Patrick can knock out Frost of the lineup, because if he is healthy, I don't see the Flyers wanting one of Patrick, Frost and Farabee on the fourth line, although with Laughton on it it's not a traditional fourth line already. The weird Flyers announcement of the offseason was when the team announced that Sam Morin would become a left winger. The 2013 first rounder is constantly hurt, and hasn't played in more than 20 professional games in a season since 2016-17. He is six-foot-six and has 25 hits in nine NHL games, so a potential fourth line role would make sense.

In the mid-2010s, the Flyers had a bunch of young defensive prospects entering their organization. They've all come up at the NHL level, and with the exception of Morin, you could say that they all panned out. The most prominent of the group is Ivan Provorov, who had 13 goals with 36 points in 69 games, with a career high 10.7 GAR. Since joining the Flyers on Opening Night of 2016-17, Provorov has played in every one of the team's games. After his partner, Matt Niskanen, surprisingly retired, either Philippe Myers or Erik Gustafsson will play with Provorov. Myers is a much better option, as he had 16 points in 50 games last year with a 51.4 CF% and an 11.2 GAR, but he played well with Travis Sanheim on the second pairing and the Flyers may not want to split that up. Gustafsson is an all-offense defenseman who often plays on his off-side. Gustafsson is a year removed from a 17 goal, 60 point season, but he regressed last year, with six goals and 29 points for the Blackhawks and Flames. Sanheim had 25 points in 69 games last year, and him and Myers created a great duo. The Flyers won't want to split them up, but also may have to if they don't want Gustafsson playing big minutes like Provorov. Justin Braun joined the Flyers and saw his ice time decrease by three minutes per game. Braun bring little to the table offensively, but is strong in his own end. Shayne Gostisbehere had 65 points in 2017-18 and 37 in 2018-19, but he had a rough 2019-20, with 12 points in 42 games. His bad 2019-20 seems like an outlier. If the Flyers are concerned about his defense, pairing him with Braun makes sense. Throughout the postseason, Gostisbehere was benched for Robert Hagg, who doesn't bring much to the table defensively, and isn't the greatest offensive defenseman either. The big camp battle here is Gostisbehere versus Hagg, and Hagg did nothing to show that he is valuable in the postseason.

22 year old Carter Hart had a really nice second year, with a .914 SV% and a 4.46 GSAA. He carried the Flyers in the postseason, with a .926 SV% and a 2.23 GAA. He was the main reason the Flyers got to game seven of the second round, let alone past game five. He doesn't have much help behind him, as veteran backup Brian Elliott returns for another season. He hasn't been an above average goalie since leaving St. Louis. Last year, Elliott had a -8.02 GSAA with an .899 SV% in 31 games.

The Flyers showed they can be a legitimate playoff contender when they were the one seed in the East last year. That seems like that's good enough to qualify. While things didn't go well afterwards, they still won a playoff series. With Hart, Konecny and Provorov leading the core. The Flyers are primed for another playoff spot in 2020-21, although I only see them sneaking in at 4th place.