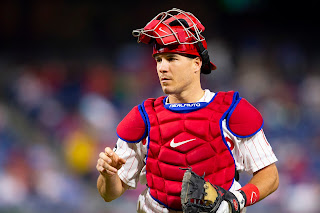 I usually don't write about free agent signings, and there is a reason for that. I feel like an article would be too short, as it's just about one player and one team. Trades are more fun as (usually) there are multiple players switching teams and an analysis to be done that isn't one sided. And especially in the MLB, the biggest flaw with their offseason is the lack of fun. So, free agent blogs would normally be short and have a lot of time between them, so I don't do them. But, yesterday, January 26th was oddly different. A bunch of hitters signed new contracts, oddly limited to middle infielders and catchers. So, if you missed any of them, here are six mini-articles combined into one summarizing yesterday's events (sidenote: Masahiro Tanaka signing overseas was not included in this article because it was not an MLB signing).

The Phillies were once rumored to not even be interested in bringing back Realmuto due to financial reasons, but a change of heart is for the best. The best catcher in baseball, Realmuto's $23.1 million AAV just nudges out Joe Mauer for the most ever given to a catcher. It is earned, as Realmuto is an elite pitch framer who hits for power and can occasionally steal bases, a rarity for a backstop. He will make Phillies pitchers better, and the deal isn't even that expensive.

2. The Blue Jays signed SS Marcus Semien to a one year, $18 million contract.

This is just under the qualifying offer salary of $18.9 million, and it is a big prove-it deal for Semien. He will not play shortstop in Toronto with Bo Bichette patrolling that spot, but he can move to either second or third base. His 2020 season was not great, but he finished 3rd in AL MVP voting in 2019 with 33 home runs and an .892 OPS. Semien's 86.2 average exit velocity last year is a concern. Overall, this signing and the next one both make next year's shortstop free agent class, which could include Francisco Lindor and Trevor Story, even better.

3. The Twins signed SS Andrelton Simmons to a one year, $10.5 million deal.

Oddly enough, Simmons is probably the only player on this list with a legitimate chance at the Baseball Hall of Fame. He will have a similar case as Omar Vizquel does now, but probably with a better WAR and hopefully without the domestic violence. Simmons has a 36.8 WAR through his first nine seasons, and his defense is to thank. He isn't a great hitter, although he can hit for average and steal double digit bases a season. Playing in only 30 games, Simmons actually had -1 outs above average in 2020, but that is a massive outlier. He'll play shortstop in Minnesota, and Jorge Polanco will move to second base with Luis Arraez moving to a super-utility role.

4. The Orioles signed IF Freddy Galvis to a one year, $1.5 million deal.

Galvis comes in as the replacement for the departed Jose Iglesias in Baltimore. He is not a great hitter, but he has hit for power the last few seasons, and has a nice glove. There's a good chance he gets traded, but for now he is a fine shortstop for a bad Orioles team that could use good defense behind a young pitching staff. With Semien, Simmons and Galvis off the board, Didi Gregorius is the main shortstop remaining, with the Phillies and Athletics in the hunt.

La Stella will cross the bay, from Oakland to San Francisco. Since joining the Angels in 2019, La Stella has been a completely different player, an all-star even. His most impressive trait is his refusal to strike out. La Stella had a league leading 5.3 K% in 2020, and also walked 11.8% of the time. Those are numbers you will take for the next three years. He can play second and third base as well.

6. The Tigers signed Wilson Ramos to a one year deal worth $2 million.

This is a signing I like for the Tigers, who started Austin Romine last year. Romine had a really rough season, and the Cubs only paid him $500k less than Ramos gets here. He isn't great behind the plate and is one of the slowest players in baseball, but he hits the ball hard and is a good hitter for a catcher. A 15 home run season is possible for him.