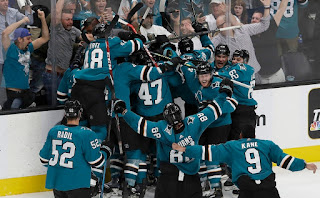 After a conference finals run and a healthy Erik Karlsson, expectations were high for the Sharks, and everything blew up. The goaltending was awful, and so was most of the team. The Sharks have an aging core, and that didn't include Joe Thornton, who finally left San Jose for Toronto. While a bounce-back season wouldn't be the weirdest thing in the world, it seems unlikely with the team barely getting better.

Best Move: Trading a third round pick to Minnesota for Ryan Donato.

One Move I'd Make: Hold on to my first round pick this time.

Worst Contract (there are a lot): Marc-Edouard Vlasic: six years remaining with a $7 million cap hit.

The top-six is actually really good, but things fall off from there. It starts with Logan Couture, who only played in 52 games last year but was not the same player he once was. He's an eight time 20+ goal scorer, but he scored just 16 goals last year with 39 points. Although he is now on the wrong side of 30, I wouldn't panic just yet. Couture has a pair of young wingers as line mates, starting with Timo Meier. At age 23, Meier scored 23 goals and led the Sharks with 49 points. He had a 52.9 CF%, well above team average. Kevin Labanc bet on himself in restricted free agency after a nice 2018-19, but that didn't work out. He scored 14 goals with 33 points and a -33 rating in 70 games. To reward him for helping them stay under the cap last year, the Sharks actually overpaid Labanc, giving him a four year, $18.9 million extension this offseason. In his second full season in San Jose, Evander Kane led the team with 26 goals, and led the league in penalty minutes for the second consecutive year, with 122. Kane always racked up penalty minutes in Winnipeg and Buffalo, but that elevated once he joined the Sharks. Tomas Hertl scored 35 goals in 2018-19, but injuries stopped him from getting a chance to come close to that in 2019-20. In 48 games, Hertl scored 16 goals with 36 points. The Sharks made a nice move to acquire Ryan Donato from Minnesota for only a third round pick. Donato scored 14 goals in 62 games last year, and in 84 games for the Wild, he had 39 points, dating back to 2018-19. He'll be a solid 2nd-3rd line winger during his stay in San Jose. The bottom six will show if the Sharks are committed to a youth movement or not. After appearing in 11 games from 2017-18 to 2018-19, 2016 2nd rounder Dylan Gambrell became a full-time player, with five goals and six assists in 50 games. The Sharks traded away Patrick Marleau at the deadline, but he signed back for a third stint with the team, which seems weird to say. If he can avoid an injury, Marleau will become the all-time games played leader in the NHL. He hasn't missed a game since 2008-09. He scored 11 goals with 11 assists last year, and received votes for the Lady Byng award. A 7th rounder in 2016, Joachim Blichfeld scored 16 goals with 16 assists in 44 AHL games, and earned a three game NHL tryout. He is one of the many Sharks in the fight for a roster spot. Matt Nieto, a California native who was on the Sharks from 2013-14 to 2016-17, returns on a one year deal. Nieto finished with 21 points in 70 games for the Avalanche last year, and he had a positive GAR in all three of his full seasons in Colorado. Another 2016 draft pick, Noah Gregor had a great 2018-19 in the WHL, then turned pro. He had 19 points in 25 AHL games, and scored three goals with two assists in 28 NHL games. The Sharks claimed first rounder Stefan Noesen off of waivers in October, and he played in 34 games with the team afterwards. Noesen scored six goals with 64 hits. Marcus Sorensen scored 17 goals in 2018-19, but he really struggled while playing with Joe Thornton, finishing with a -3 GAR. Entering free agency, this is the last year for the Sharks to figure out what they have in him. Antti Suomela came to the Sharks as an undrafted free agent after having great numbers in Finland, but he hasn't played well in North America. He had seven points in 20 games last year, with nine in 14 AHL games. In the 2020-21 season in Finland, Suomela played in 10 games, with five points. After scoring 20 goals in 50 DEL games, the Sharks signed 22 year old Lean Bergmann. His first season didn't go as planned, as he had one assist in 12 NHL games, and 17 points in 31 AHL games. Swedish forward Joel Kellman got into 31 NHL games last year, and had seven points. He had five points in 14 games while playing Sweden this season.

Brent Burns is a great offensive defenseman, but he really isn't a good defensive defenseman. Burns scored 12 goals with 45 points in 70 games. His average ice time was 25 minutes, and he hit the double-digit goal mark in the past seven years. Radim Simek seemed like the perfect safety blanket for Burns in half of a season in 2018-19. He regressed in 2019-20 as the team regressed, with nine points and a -5.5 GAR in 48 games. Erik Karlsson has regressed since leaving Ottawa, but that's mainly because he's played in 53 and 56 games in his two seasons with San Jose. He scored six goals with 40 points last year, and his 3.8 GAR was his lowest since his 17 game 2012-13 season. Marc-Edouard Vlasic was once the definition of a shutdown defender, but he has regressed a lot since signing a big extension. Vlasic had 15 points in 70 games with a -4.6 GAR. His average ice time of 20 minutes and 18 seconds was the lowest of his career. 2017 2nd rounder Mario Ferraro went straight from UMass-Amherst to the NHL last year, and had 11 points in 61 games. The fifth spot is up for grabs, with Jacob Middleton having the upper hand. Middleton had three assists in 10 NHL games last year, with six in 32 AHL games. The best option for the team's future is Ryan Merkley, the 2018 1st rounder who played in two AHL games last year after dominating the OHL. In 60 games for the London Knights, Merkley scored 15 goals with 76 points. Trevor Carrick has six NHL games, with three of those coming last year for the Sharks. He scored 10 goals with 23 points in 48 AHL games.

The Sharks have some good players. But, they have no depth, and unlike their rivals, the Kings and Ducks, the young players filling in aren't highly touted prospects or really young. The team is still far from a rebuild, with many veterans signed to terrible long-term deals. The Sharks will finish 7th in the West Division, and miss the playoffs.