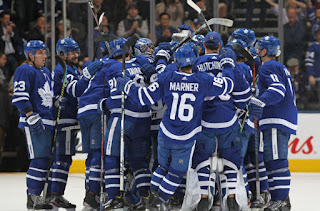 While the overall record was not great for the Maple Leafs last year, you could argue that it was a matter of who was behind the bench that was stopping Toronto. They were 9-10-4 when Mike Babcock got fired, and when AHL Head Coach Sheldon Keefe was promoted, the team went 27-15-5. However, the only things that people remember about Keefe's tenure so far is the embarrassing game 5 loss to Columbus to knock them out of the playoffs, and losing to THEIR OWN ZAMBONI DRIVER. It's still funny to think about. Now, the Leafs have no coaching issues, no more cap issues (for now), and no more Lightning or Bruins to worry about. The 2020-21 season will define who the Toronto Maple Leafs are.

Best Move: Acquiring a first round pick in a package for Kasperi Kapanen.

One Move I'd Make: Trade Michael Hutchinson to either the Sharks or Capitals.

Auston Matthews just doesn't get enough credit as a goal scorer as he should. Matthews scored 47 goals with 33 assists for 80 points in 70 games last year, and his 35 even strength goals led the league. He finished 10th in Hart voting and 2nd in Lady Byng voting, as he took just four minor penalties all season. In his four year career, Matthews is averaging 46 goals per 82 games, and his lowest goals per game season was his rookie year, when he scored 40 goals. On the flip side, Mitch Marner mostly racks up assists. He scored 16 goals in 57 games last year, which isn't bad, but it looks minuscule next to his 51 assists. Marner has 291 points, with 208 of them being assists in 300 career games. Interestingly, the lineman for Matthews and Marner looks to be Joe Thornton to start the year. Thornton is also a playmaker, so Matthews will just rack up goals with those wingers. The future Hall-of-Famer is 41 years old, and is coming off of his worst year since he was 18. Thornton had seven goals with 31 points in 70 games in his 15th and probably final season in San Jose. Putting him on the top line means that Keefe believes that Thornton can skate with Marner and Matthews. I can confirm that John Tavares was not toiling away on Long Island. Tavares didn't have the year he had in 2018-19 last year, but he still played well, with 26 goals and 60 points in 63 games. For the seventh season in a row, Tavares had negative defensive value. People were right to be concerned with William Nylander after he was terrible when coming back from holding out in 2018-19. But, he proved the haters wrong last year, with a career high 31 goals with 59 points in 68 games, for a career best .87 points per game. The Leafs like Zach Hyman a lot, but they might not have the cap space to bring him back after this season. Despite playing in a career low 51 games, Hyman matched his career high of 21 goals, and he had 37 points with a 52.8 CF%. Alex Kerfoot is the favorite for the third line center role, although he has some competition. After posted 40+ points in his first two season, Kerfoot had just 28 last year, with nine goals, six less than he scored with Colorado in 2018-19. Ilya Mikheyev only played in 39 games in his rookie year due to an injury, but he was productive. Mikheyev had 23 points with a 54.1 CF%, and only Marner spent more time on the penalty kill among Leafs forward than him. Nick Robertson seems like a steal from the second round in 2019 right now. He scored 55 goals with 86 points in 46 OHL games, and made his NHL debut in the playoffs against Columbus. He scored a goal in four games. Robertson has a good chance to make the third line this year. Wayne Simmonds was once a big-time goal scorer, but last year he had just eight goals in 68 games. What he mostly brings is physicality, as he had 66 penalty minutes with 145 hits last year. With the way that things ended last year, you could tell that Jason Spezza was devastated. He came back for another year, and he just wants to win his first Stanley Cup. He was a really good fourth line center last year, with 25 points and a 7.2 GAR. The last wing spot is up for grabs. Former Hobey Baker winner Jimmy Vesey had 20 points in 64 games last year, and has averaged 15 goals with 28 points a season over his four year career. He was skating on the second line in practice, so that's a good sign for his hopes. 2014 7th rounder Pierre Engvall scored eight goals with seven assists in a 48 game rookie season. He had good AHL numbers, with 16 points in 15 games. Travis Boyd had 10 points in 24 games as a bottom-six player for the Capitals last year. He can play center and the wing, and he scored a goal in four playoff games. 26 year old Alexander Barabanov comes from St. Petersburg of the KHL. He scored 11 goals with 20 points in 43 games for them last year. Both Denis Malgin and Nic Petan were recently waived by Toronto. They both have some NHL experience, and are only 23 and 25 years old, respectively.

Morgan Rielly remains the star of the defense, and he has some help this year. After a 20 goal, 72 point 2018-19 season, Rielly was doomed to regress in 2019-20. He did, with three goals and 24 assists in 47 games. Rielly's average ice time of 24 minutes and 12 seconds was a career high. TJ Brodie seems like the perfect fit for the Leafs. He shoots left handed, but plays on the right side, which is an area of need for Toronto. He grew up a fan of the team, and posted nice numbers over a decade in Calgary. His scoring took a dip last year, as he had 19 points in 64 games, dropping below 30 points for the first time since 2012-13. Brodie did have a GAR of nine, so it wasn't all bad. Jake Muzzin was a great fit after the Leafs got him in 2018-19. He had 23 points in 53 games last year, with a 52.9 CF%. Justin Holl finally became a regular at age 28 last year, and he played well, with 18 points in 68 games, and a 2.8 GAR. The third pairing is where things can get messy. Travis Dermott has been a regular for the past few years. He had 11 points in 56 games in 2019-20, but he had a career high 10.3 GAR. Mikko Lehtonen has showed a lot of offensive potential in the KHL, as he scored 17 goals with 49 points in 60 games last year. In their 2020-21 season, Lehtonen had 17 points in 17 games. Zach Bogosian played in 20 of the Lightning's 25 playoff games en route to a Stanley Cup victory. He's just a big meany on the blue line and not much else. 2018 1st rounder Rasmus Sandin has a shot at the roster after he posted eight points in 28 games last year. In the AHL, Sandin had 15 points in 21 games. Martin Marincin played in 26 games last year. He has played in 142 games for Toronto over the past five years. 2017 1st rounder Timothy Liljegren is also an option. He played in 11 NHL games last year, and he had 30 points in 40 AHL games.

It will be interesting to see how the Leafs deal with Frederik Andersen, who will be a free agent after the season. He was a solid goalie in his first three years with the Maple Leafs, but last year was the worst year of his career. Andersen had a .909 SV% with a negative GSAA and a 2.85 GAA. Andersen didn't really have a backup to start out the season, so the Leafs went out and traded for Jack Campbell. Campbell was successful in his six games after the trade, with a .915 SV%. To make sure that the Leafs don't have backup trouble, they signed Aaron Dell. Dell had a .907 SV% in 33 games as the Sharks' backup last year. Michael Hutchinson was the struggling backup last year, and he returns after going to Colorado and succeeding in the playoffs as an emergency third goalie.