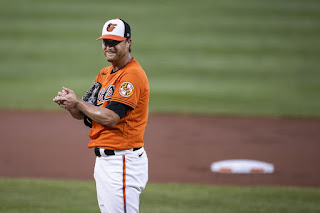 The Los Angeles Angels have acquired RHP Alex Cobb and cash from the Baltimore Orioles in exchange for 2B Jahmai Jones.

The Angels need starting pitching every year, and every year they fail to deliver. Cobb and Jose Quintana are their big additions this year, which would be good in 2016, not 2021. Since joining the Orioles in 2018, Cobb has fallen off, although he missed just about all of 2019. Over his three seasons with the Orioles, Cobb had a 5.10 ERA with an abysmal 6.1 K/9 in 41 starts. He also is not cheap, with one year remaining at $15 million, but Baltimore is expected to cover most of that money. Cobb's biggest reason for failure is pretty easy to identify. For whatever reason, the guy will not stop throwing his sinker. A pitch that he didn't utilize as much in the beginning of his career, it was Cobb's go-to pitch as an Oriole. He threw it 47.5% of the time in 2020, and it got absolutely crushed, with an average exit velocity of 93.1 mph, a 7.5 whiff rate and a batting average against of .353. Even worse, his xBA of .363 on that pitch shows that he was a little bit lucky. It isn't like he has no decent pitches; Cobb's split finger had a .181 average against with an average exit velocity of 86.7 mph while being used over 35% of the time last year. He needs to throw more of that pitch, and a lot less sinkers. Giving up the 7th best prospect in the system is not great, but the Angels have four other middle infielders in MLB Pipeline's top-10 prospects, so they can live without Jones.

The tankathon continues between the Orioles and the Pirates. With this move, only Chris Davis makes more than $5 million on the team, and five players make more than $1 million. They get a nice return here for Cobb. Jones was ranked 7th among prospects in the Angels organization by MLB Pipeline, and he made his MLB debut in 2020, going 3-for-7. The 2nd round pick in 2015 should go to AAA in 2021, a level he has never played at. At AA in 2019, Jones really struggled offensively, before posting an .886 OPS in 16 games in the Arizona Fall League.