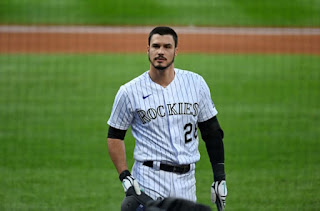 Well, if there wasn't a clear cut favorite for the NL Central before, there is now. The Cardinals put themselves in a similar situation as they were two offseason ago, when they acquired Paul Goldschmidt from the Diamondbacks. At that time in 2018, it was safe to say that Goldschmidt and Arenado were the top two hitters in the National League West, and they are teammates now. Just like Goldschmidt, Arenado is an amazing hitter, and also a great defender. Arenado has won the National League Gold Glove award at third base in each of his eight career seasons, with a Silver Slugger in four of them. He had a down year offensively in 2020, but he only played in 48 games. His lowest home run total in the five years prior was 37, and his lowest OPS was .898 over that frame. There might be a concern whether Arenado can hit away from Coors Field, something he will now do full-time, he has a .985 home OPS, and a .793 road OPS. But, he still excels at things that a field cannot factor into. Arenado had seven outs above average with a 10 K% in 2020, which were both in the top one percent of hitters. And while it fell this year, Arenado was in the top-10 percent of hitters in wOBA in each of the previous five seasons. While he does get paid a lot of money, it is definitely worth it for one of baseball's premier players. Under his current contract, Arenado would earn $35 million in each of the next four seasons, followed by a $32 million 2025 season, and then a $27 million 2026 season, as he would enter free agency after his age 35 season. However, Arenado has an opt-out after the 2021 season, which could have been a concern for the Rockies, forcing them to trade him. But, by waving his no-trade clause to go to St. Louis, Arenado will have another opt-out clause, this one coming after 2022. So, he can leave the Cardinals after the next two seasons, if he wants to. The Cardinals also get some financial security here, as for some reason the Rockies are sending them an additional $51 million in cash. They make out of this trade really well, as they don't even give up any of their top prospects.

The Rockies just don't do things right. Another franchise icon's prime years with the team have been wasted, as Arenado joins Larry Walker, Todd Helton and Troy Tulowitski. Soon, it may be Trevor Story, who is a free agent after 2021. Reportedly, the Rockies will use the money saved in this trade to try to extend Story, but there is no reason now for Story to want to stay in Colorado. The return isn't great for Arenado, and they give up a ton of money just so St. Louis can take him. The only MLB player is Gomber, who has started MLB games, but was good in a mostly relief role in 2020. The 2014 4th rounder isn't young. He has a 2.95 ERA over six minor league seasons. The highest ranked prospect going to the Rockies is Elehuris Montero, who was ranked 8th. With a talent like Arenado, one of Dylan Carlson, Nolan Gorman and Matthew Liberatore, the top-three prospects in St. Louis' system, should be acquired every time, regardless of salaries. Montero was great as a 19 year old in Single-A and High-A in 2018, but could not handle the jump to AA in 2019. After that amazing 2018, where he posted an .875 OPS, Baseball America ranked Montero as the 81st best prospect in all of baseball entering 2019, one slot ahead of Dustin May, and a few slots ahead of Brandon Lowe and Will Smith. Of the other three prospects, only two were in the top-30 prospects for the Cardinals. Locey, a 2019 3rd round pick, was ranked 19th. After a 3.92 ERA and a 9.4 K/9 over three seasons at Georgia, Locey was exclusively a reliever in his short minor league season. Ranked 22nd in the St. Louis system, Mateo Gil was also a third round, but from 2018. He was drafted out of high school, so he is actually younger than Locey. The son of former World Series champion Benji Gil, he was pretty average in 2019. Finally, Sommers was a 10th rounder in 2019. After posting a 5.59 ERA at the University of Wisconsin-Milwaukee, Sommers pitched in the Appalachian League in 2019. Overall, this is a really disappointing return, especially as it is a punch to the gut for Rockies fans.