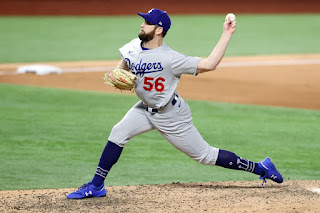 Today, the Los Angeles Dodgers acquired IF Sheldon Neuse and RHP Gus Varland from the Oakland Athletics in exchange for LHP Adam Kolarek and OF Cody Thomas.

Having incredible depth just about everywhere pays off, and it shows with these two trades. The Dodgers' bullpen has no shortage of options, especially on the left side. Kolarek had a 0.88 ERA in 46 games in Los Angeles, and the fact that he is expendable is impressive. With Victor Gonzalez and Caleb Ferguson also giving them production, they could focus on other elements of the roster. After losing Enrique Hernandez and potentially losing Justin Turner, the Dodgers could use a right handed hitting infielder. In steps Neuse, who debuted for the A's in 2019, but struggled. He absolutely raked at AAA, however. Neuse did not appear in an MLB game in 2020, but that could easily change in 2021. Varland was a 14th round pick in 2018 for Oakland. He does not have much minor league experience, but his 10.8 K/9 in the games that he has played in is impressive. The Dodgers trade Thomas here mostly because they did not have a spot for the 26 year old in the organization. Overall, I don't like this trade for them as the deal Kolarek, an effective left hander and Thomas, who was their 29th best prospect (per MLB Pipeline) for a depth piece in Neuse and a low-level prospect in Varland.

From both a win-now and future perspective, I like this trade for Oakland. After Jake Diekman's 2020 dominance, they could use a left-hander to deal with platooning while Diekman moves to a high-leverage role. Kolarek is a perfect option. He has three extra years of team control after 2021, and was great in Los Angeles. In 2020, lefties went 3-for-40 against him, with a slugging of .088 against his sinker.   A 2016 13th round pick, Thomas has hit for power in his minor league career, most recently at AA. He moves up to the 20th spot in the A's prospect rankings, per MLB Pipeline. He is an older prospect, and he's actually older than Neuse.