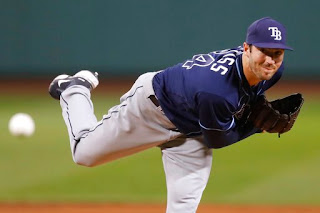 The Miami Marlins have acquired RHP John Curtiss from the Tampa Bay Rays in exchange for 1B Evan Edwards.

The Marlins have gone bargain hunting to improve their bullpen as of late, and they have went after guys previously on World Series teams. First it was Dylan Floro of the Dodgers last week, and now they bring in Curtiss. One of the many successful reclamation projects over the years in Tampa Bay, Curtiss throws a fastball and a slider predominantly, and both can miss bats. One of Curtiss' most impressive achievements from last year was a great 3.0% walk rate. However, the concern that probably caused the Rays to deal him is more important. Curtiss' got shelled on average, with an average exit velocity against of 92 mph. That was in the bottom two percent of pitchers in 2020, while the walk rate was in the top two percent.

The Rays are known for finding players out of nothing, and that was Curtiss before 2020. He spent last year as an opener and a middle relief pitcher, something that they can replace easily. Curtiss also struggled in the ALDS, which inflated his postseason ERA to 6.30 over 10 innings. Despite a K/9 of 9.0, Curtiss doesn't even strike out that many guys compared to his Rays teammates. Edwards was not ranked among the top 30 Marlins prospects, but the 2019 4th round pick was exceptional at North Carolina State, and had fine numbers when he played professionally.