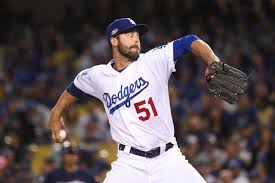 The Miami Marlins have acquired RHP Dylan Floro from the Los Angeles Dodgers in exchange for LHP Alex Vesia and RHP Kyle Hurt.

This is a minor trade that works out for both teams. The Marlins recently lost Brandon Kintzler to the Phillies, and Floro is a nice replacement. He has gone under-the-radar on a stacked Dodgers roster, and the  stats show it. In 2020, Floro was in the top six percent of pitchers in average exit velocity (84.6 mph), hard hit percentage (26.7%) and BB% (4.1). He is not a big strikeout guy, but Floro had a 3.10 ERA from 2018 to 2020 with Los Angeles. For a Marlins team that has lost some bullpen pieces, he is a welcome addition. Plus, they have him under team control for the next three seasons. They trade two prospects with promise, but neither were ranked in the top 30 prospects in the organization by MLB Pipeline.

Vesia is a really intriguing prospect for the Dodgers to go after. He will be 25 in April, so he isn't the youngest guy, and he got lit up in five MLB games last year. However, he has been a dominant minor league pitcher since being selected in the 17th round in 2018. He had a 13.5 K/9 in 2019, however most of that were in levels under AA. So, it would be wise for the Dodgers to start out Vesia in either AA or AAA, and let him develop. If he can continue the success he has had so far in the minors, they could easily win this trade. Vesia isn't going to post a 18.69 ERA with seven walks in 4.1 innings again like he did in 2020. Hurt was selected in the 5th round in 2020's draft out of the University of Southern California. Of course, he has not played any professional games yet.