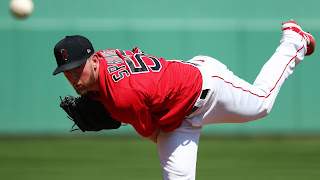 The Tampa Bay Rays have acquired LHP Jeffrey Springs and RHP Chris Mazza from the Boston Red Sox in exchange for C Ronaldo Hernandez and IF Nick Sogard.

For the Red Sox fans reading this, you should be feeling excitement with extreme anxiety following this trade. On paper, it is great. Both Springs and Mazza were recently designated for assignment by the team, and this is a great return for them. Hernandez was once a high-end prospect who fell off in 2019. He still has promise, and MLB Pipeline ranked him as the 14th best prospect in a deep Rays system, and he will likely be higher for Boston. Before 2019, they ranked him as the 84th best prospect in baseball, and Baseball America ranked him 56th. A 12th round pick in 2019, Sogard is about what you would expect to get for two DFA'd pitchers. He hit for average at Loyola Marymount, and did the same once turning pro. He steals bases, but do not expect him to hit a home run. Of course, Red Sox head Chaim Bloom came from Tampa Bay's system, so he'd know their system well, especially Hernandez, who has been in their pipeline for years.

The reason for Red Sox fans to feel nervous is because of something baseball fans should be used to by now. The Rays are elite at developing pitchers. You could see that with John Curtiss, the outgoing reliever who had a 1.80 ERA in 2020. In Curtiss' spot come Mazza and Springs. Mazza opened six games for Boston last year, so he will fit in well as a multi-inning reliever in Tampa Bay. He did not allow a lot of hard contact, with an average exit velocity of 86.4 mph, and a 31.1 hard hit percentage. However, despite that Mazza had an xBA against of .298, and a 6.11 xERA. While Springs did not have great basic stats last year, it is easier to see why the Rays would want him. Springs had a 7.1 BB%, with a 28.3 K%. His change-up was great, with a .186 xBA, a 78.4 average exit velocity, and a 52.8 whiff rate. You can expect him to throw that a lot more with the Rays.