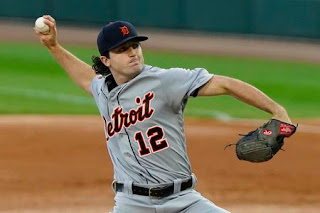 If you remember early in the 2020 season, the Tigers actually looked pretty good. A quarter into their 58 game season, the Tigers were 9-5, with the bullpen looking pretty good. The team then proceeded to lose nine in a row, and then finished out the season by losing 12 of 15. The overall philosophy of the Tigers was probably the correct one for a team with no hope entering a season. They threw everything at the wall to see what sticks, while waiting for the minor league talent to rise up. Help may be on the way soon, as the team selected infielder Spencer Torkelson first overall in the 2020 draft.

There is so much potential in this rotation, but there just wasn't results in 2020. Matthew Boyd is a prime example of this, as while he had good expected numbers in years prior, nothing went well for him last year. For the second year in a row, Boyd allowed the most home runs in the league, with 15 in 12 starts. Boyd also allowed a league most 45 earned runs in 60.1 innings for a 6.71 ERA. He has good breaking and offspeed pitches, with high whiff rates. The lowest whiff rate on his changeup, slider and curveball was 39.8%. Spencer Turnbull was the most effective of Tigers starters, with a rotation-leading 3.97 ERA. His slider had a .151 average against with a 43.6% whiff rate. Turnbull does allow hard contact, with an average exit velocity of 91.1 mph. The Tigers' Opening Day rotation will depend on if Casey Mize and Tarik Skubal make the team out of Spring. Mize is MLB Pipeline's 11th best prospect in baseball, while Skubal is 24. Another potential pitcher for the 2021 Tigers, Matt Manning, is 25. Drafted 1st overall in 2018, Mize had a 2.71 ERA in 26 MiLB starts, but struggled in seven MLB starts, with a 6.99 ERA, a 7.27 xERA and a .551 xSLG. Skubal was better, but not by much. He had a 5.63 ERA with 37 strikeouts in 32 innings, plus a 4.33 xERA and a .222 xBA against. There are a ton of fifth starter options, assuming Mize and Skubal make it. I would actually say that the favorite is Julio Teheran, while the rest mope to the bullpen. Teheran was awful for the Angels in 2020, allowing 35 runs in 31.1 innings. But, I think that the Tigers are willing to take a bet on him, seeing Teheran's 3.81 ERA and 121 ERA+ in 2019. Former ROY winner Michael Fulmer is also a favorite, although his xERA was fourth worst in baseball. Ironically, Teheran was dead last. Fulmer missed 2019 with Tommy John surgery, and came back a completely different pitcher, with an 8.78 ERA over 10 starts. Batters had an xSLG of .564 against Fulmer.

The Tigers closing role is wide open after Joe Jimenez lost it last year. Jimenez can still win the role out of Spring Training. 2020 wasn't fun for the former all-star, as he finished with a 7.15 ERA and 22 strikeouts in 22.2 innings. Batters crushed Jimenez, with a 92.1 mph average exit velocity. One silver lining for Jimenez was a career best 5.9 BB%. Bryan Garcia had a great season, putting him at the top of closing candidates for new manager AJ Hinch. While only striking out 12 batters and walking 10 in 21.2 innings, Garcia allowed just four earned runs for a 1.66 ERA. He had a top-10 percentile xwOBACON of .301. Lefty Gregory Soto didn't allow a run until his 11th game, and if you take out two awful performances where he allowed a combined seven runs in just 0.1 innings, Soto had a 1.59 ERA. Those appearances do count, so Soto had a 4.30 ERA. He struck out 29 batters in 23 innings, with a high-90s sinker and a slider that had a .056 average against with a 61% whiff rate (!!!). Buck Farmer struck out 73 batters in 2019, but had just 14 Ks in 21.1 innings for a 5.9 K/9. Despite a 3.80 ERA, Farmer had a 5.25 xERA, his worst since 2015. Hard throwing righty Jose Cisnero throws a wipeout slider that struck out 16 of his 34 Ks, and a 48.5% whiff rate. He also had a 3.03 ERA with a 4.30 xERA. It may seem crazy, but I think that the Tigers could potentially go with 14 pitchers and only three bench players, assuming Mize and Skubal make the rotation. In this scenario, I would have Fulmer, Tyler Alexander, Daniel Norris and Jose Urena in the bullpen, although I don't think any other Tigers reliever has a great chance at making the team. You may have heard about Alexander's 10 strikeout, 3.2 innings relief appearance in August, but the rest of the season was just alright. Alexander finished with a 3.96 ERA, and his sinker got crushed, with a .630 slugging against. Norris could climb his way back into the rotation, but he was productive in the 'pen in 2020. His 3.25 ERA was a career best, and batters hit just .139 against his change-up. Former Marlins ace Jose Urena started just five games for them last year, and was DFA'd in the offseason. Urena allowed 14 earned runs in 23.1 innings. For someone who throws hard, Urena has a very low K% of 14.4%.

Out is Austin Romine after he got destroyed at the plate in 2020, and in comes Wilson Ramos, who also wasn't on his game last year, but has a better offensive history. Ramos hit five home runs with a .684 OPS, but he was an above average hitter in three of his previous four seasons. He is a pretty bad defender, so having a defensive backup like Jake Rogers would help. Rogers in a camp battle with Grayson Greiner for the backup job. Rogers did not play in 2020, and struggled offensively in 2019. However, he played in 76 games between AA and AAA that year, and had an .845 OPS. The 28 year old Greiner has a .568 OPS in 106 career games.

Miguel Cabrera spent 2020 exclusively at designated hitter, although maybe we could see him at first in an emergency situation. While he only had a .746 OPS, Miggy hit 10 home runs with an average exit velocity of 93.2 mph. He also had a great hard hit percentage of 49.7%. Non-roster invitee Renato Nunez was non-tendered by the Orioles after a 31 home run season and then a 12 home run season. Despite an average exit velocity drop by over 3 mph, Nunez had the higher OPS in 2020, at .816. Like Nunez, the second baseman is also a former Oriole. That is Jonathan Schoop, who delivered another nice season in 2020, his first as a Tiger. Schoop hit eight home runs with a .278 average and a .799 OPS. He is also an above average defender at second base, with two outs above average. The left side of the infield consists of the two best Tigers hitters in 2020. At shortstop is Willi Castro, a 23 year old who finished 4th in Rookie of the Year voting. In 36 games, Castro hit six home runs with a .349 average and a .932 OPS. He had an xBA of .299 and an average sprint speed of 28.2 ft/s. His defense can be improved. Jeimer Candelario mainly played first base last year, but Nunez making the team will send him back to his original position of third base. Candelario hit .297 with an .872 OPS and a 47.1% hard hit percentage. A former top prospect of the Cubs, Candelario finally regained the potential the Tigers saw when they acquired him in 2017. Acquired in that 2017 trade with Candelario (for Justin Wilson and Alex Avila) was Isaac Paredes, who could start at third if Nunez doesn't make the team. The 22 year old Paredes debuted in 2020 to a .568 OPS. A top-100 prospect for Baseball America in previous years, Paredes has a .775 OPS in his minor league career. Utility man Niko Goodrum can be seven positions, and Castro probably bumps him out of the starting SS job into a super-utility role. Goodrum had a .598 OPS with a .185 xBA and a 38.5 K%. On the bright side, Goodrum had five outs above average at shortstop, which is amazing for a shortened season.

The Tigers updated their corner outfielders, but the constant remains JaCoby Jones in center. Jones has good speed and is an above-average defender, and he had his best offensive season in 2020. Jones hit five home runs with an .849 OPS, and his 127 OPS+ was his first above-average number. The team signed Robbie Grossman to play left field. Grossman hit eight home runs and stole eight bases with an .826 OPS for the A's last year. The reason that was so high is because of a high walk rate of 10.9%, which was actually his lowest since 2015. Grossman was once a defensive liability, but had four outs above average in left last year. 25 year old Nomar Mazara has shown promise, with 20, 20, 20 and 19 home runs in his first four seasons, but he never had an OPS+ over 100, and he had his worst season in 2020, with the White Sox. Mazara struck out a career worst 29.5%, with a .263 wOBA. On the positive side, his 48.9% hard hit percentage was a career high. Switch hitter Victor Reyes has above-average speed with an above-average glove. He can also hit for average, with a .277 BA and a .287 xBA in 2020. Reyes swiped eight bases, although he only walked 4.2% of the time. A potential option for the bench is Rule 5 pick Akil Baddoo, a 2016 2nd rounder of the Twins who is 22 years old. Baddoo has only reached as high as High-A, and he has a .780 OPS in his MiLB career. Former first rounder Christin Stewart (no, not that one) is also in the mix. Stewart had a .524 OPS in 2020, and just a .676 career OPS.

I think you guys know how this is going to end. Granted, the lineup is that bad, and the rotation has depth with help on the way. But, in the grand scheme of things, the Tigers just aren't a good Major League Baseball team. Unsurprisingly, they will miss the playoffs in 2021.