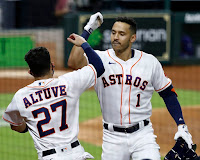 The oddities of the 2020 MLB season were shown with the Astros' performance. The team finished under .500, at 29-31, but thanks to the expanded playoffs and the fact that two teams in each division had to make the playoffs aided the Astros, who were able to sneak in, and then make an impact. The team beat the Twins in the wild card round, then the rival A's in the ALDS. They took the Rays to seven games in the ALCS, but couldn't close it out. The team definitely got worse over the offseason, but some promising young pitchers may keep them afloat.

Gerrit Cole and Charlie Morton of course have left the Astros in recent years, but Justin Verlander might be next. For now, Verlander is out of commission for the 2021 season after having Tommy John surgery. Zack Greinke is still healthy, and he'll be the only veteran in the rotation. Greinke can still limit base on balls, with a 3.3 BB%, his lowest over the past six seasons. Greinke had 67 Ks in 67 innings, with a 4.03 ERA, which was his worst since 2016. Former spot starter Framer Valdez cemented his spot in the rotation with a 3.57 ERA and 76 strikeouts in 70.2 innings. He also had a 2.85 FIP, and an elite curveball that had a 2982 rpm and a .124 average against. On the negative side, batters hit Valdez hard, with a 91.4 mph average exit velocity and a 48.7 hard hit percentage. A finger fracture will sideline Valdez for the start of the season. While Kyle Lewis and Luis Robert got all the recognition, Cristian Javier finished third in AL Rookie of the Year voting, and I guess you could call him the AL Rookie Pitcher of the Year. Javier, who will turn 24 just before Opening Day, had a 3.48 ERA with 54 strikeouts in 54.1 innings, allowing just 36 hits. He was in the top-ten percent of the league in hard hit percentage (29.3%), xBA (.185) and xERA (2.94). Lance McCullers Jr. returned from Tommy John surgery and picked up right where he left off. His strikeout rate decreased by a little bit, but with 56 in 55 innings, he still averaged one per inning. Batters had a 42.1% whiff rate on his curveball, which has an average spin rate of 2787 rpm. Jose Urquidy missed the first half of the season for an undisclosed reason, but made five starts in September. He allowed just nine runs in 29.2 innings for a 2.73 ERA, while striking out 17. His 5.22 xERA suggests that he got lucky. Top pitching prospect Forrest Whitley is still in the mix. He had a 7.99 ERA in 59.2 MiLB innings in 2019, but struck out 86 batters. Brandon Bielak struggled as a rookie, splitting time between the 'pen and the rotation, striking out 26 and walking 17 in 32 innings with a 6.75 ERA.

The Roberto Osuna era is over in Houston, starting with domestic violence issues, then an Assistant GM controversy, and ending with Tommy John surgery. After Osuna's injury, Ryan Pressly took over as the closer. Pressly converted 12 saves with a 3.43 ERA and 29 strikeouts in 21 innings. Pressly has an elite slider, and he limited batters to a .297 xSLG with a 2.74 xERA. Rookie Andre Scrubb burst onto the scene with a 1.90 ERA and 24 strikeouts in 23.2 innings, and provoking a bunch of "Scrubb" jokes. He does have a control issue, walking 19.6% of batters. With a 22.4% hard hit percentage, Scrubb starts the trend of Astros relievers with great hard hit rates. Scrubb was third in the league, and lefties Brooks Raley and Blake Taylor were fourth and fifth. Raley came over from Cincinnati after being DFA'd. He struck out 21 in 16 innings with a 3.94 ERA, an 81.7 mph average exit velocity and a .178 xBA. It was Raley's first MLB season since 2013. Taylor came over from the Mets for Jake Marisnick in the offseason. The Astros already won the trade, as Marisnick played in just 16 games for New York. Taylor had a 2.18 ERA over 22 appearances, with an 83 mph average exit velocity, a .180 xBA and a .278 xSLG. Enoli Paredes had a rookie ERA of 3.05, but an xERA of 5.76. His high-spin slider had a .190 average against and a 46.3% whiff rate. The team's main bullpen acquisition was Pedro Baez, who had been a staple in the Dodgers' bullpen since debuting in 2014. Baez had a 3.18 ERA in 2020, which was slightly higher than his career total of 3.03. He allowed just 10 hits over 17 innings. Side-armer Joe Smith didn't pitch in 2020, but he left 2019 on a good note, with a 1.80 ERA and a 0.960 WHIP in 25 innings. Batters went just 2-for-25 against Smith's best pitch, his slider. Josh James struck out 100 batters out of the bullpen in 2019. He had hip surgery in the offseason and will miss at least a month of the season. James walked 17 batters with 21 strikeouts and a 7.27 ERA in 17.1 innings in 2020. The final spot comes down to Ryne Stanek and Steve Cishek, two new additions, but only Stanek is on the 40-man roster. Stanek throws hard, and was once dominant for the Rays. But, he looked lost after being traded from Tampa Bay in 2019, walking 27 batters in 31.1 innings. Cishek is a veteran who did not have an ERA over 3.00 from 2016 to 2019. That changed in 2020, as Cishek joined the White Sox, and allowed 12 runs in 20 innings for a 5.40 ERA. Batters had a high barrel percentage of 11.9% against Cishek.

The catching role will be filled by a platoon with two guys on their second stint in Houston. Jason Castro returns to the team that drafted him 10th overall in 2008, and the team that he played his first six seasons for. Castro spent 2020 with the Angels and Padres, hitting .188 with a .668 OPS. He is a good pitch framer and walks often, with an 11.1 BB% since 2015, but strikeouts are still the problem. Castro has a 30.8 K% over that same time period. The right-handed option is Martin Maldonado, an elite defensive catcher who wasn't so bad offensively last year, with a 98 OPS+. Maldonado hit six home runs with a .727 OPS, which was inflated by an elite 16.4 BB%. Unfortunately, he also struck out at a 30.9% rate.

The Astros still have an elite infield, although only one of them performed in 2020. That was Alex Bregman, who regressed but still had an above-average 116 OPS+. Bregman hit six home runs with an .801 OPS, and only struck out 14.4% of the time. He walked 24 times, only two less times than he struck out. Carlos Correa was able to play a full season, but he wasn't himself at the plate. Correa had an OBP of just .326, and a low .709 OPS. After nine outs above average in 2019, Correa had zero in 2020, in just 17 less games. Correa still hit fastballs well, with a .303 average against them. Jose Altuve was once elite at not striking out, but that has gotten worse and worse as he has tried to hit for power more. Altuve struck out 39 times for a still pretty good 18.6 K%, while hitting only .219. Altuve's previous career low batting average was .276, back in his rookie season of 2011. His 71 OPS+ was the lowest of all Astros regulars. Altuve was just worse than Yuli Gurriel, who finished at 76. Gurriel still only struck out 11.7% of the time, but at 5.2%, he does not walk enough. That led to a really low .274 OBP once he stopped hitting for average in 2020. Gurriel was a good defensive first baseman, with two outs above average. The Astros brought in Aledmys Diaz before 2019 to be a utility infielder, but in two seasons injuries have limited him to 86 games. Combined, Diaz has hit 12 home runs with an .807 OPS. After appearing in 33 games last year, corner infielder Abraham Toro is expected to make the team. But, Toro had a .513 OPS last year. So, I will go off the board instead, with switch-hitter Robel Garcia, who was claimed from the Angels in February. Garcia will soon be 28 and only has 31 games of MLB experience, all in 2019, but he had a .775 OPS, and in the minors that season, Garcia hit 27 home runs with a .954 OPS.

The Astros watched George Springer leave to Toronto, and Josh Reddick is still an un-signed free agent. It could have been worse, as Michael Brantley was rumored to be following Springer in Toronto, but then changed course and went back to Houston. Brantley's performance didn't decline while most of his teammates did, as he hit .300 with an .840 OPS, and a 126 OPS+, the latter matching his 2019 number. Brantley does not strikeout often, with a 10.6 K% since 2015. Brantley is not a great defensive left fielder. Finishing 2nd on the team in WAR was Kyle Tucker, who was a prospect for what felt like an eternity. Tucker hit a league leading six triples, with nine home runs and eight stolen bases. He had an above-average 91.1 mph average exit velocity, and was a great defender in left field, with three outs above average, while adding one in right field. He will move to right primarily in 2020, as Brantley has to play in the field. No Springer replacement was brought in, so Myles Straw has an open lane for the center field job. Straw had an amazing 30.1 ft/s sprint speed in 2019, but that oddly dropped to 28.6 in 2020, which is still really good. He only made 86 Plate Appearances, but finished with a .500 OPS. Steven Souza Jr. is in camp as a non-roster invitee, and has a good chance to be the fourth outfielder, while Diaz and Garcia can also play OF. Souza was hurt for most of 2018 and missed all of 2019. He returned in 2020 for 11 games, playing for the Cubs. He went 4-for-27 with a .591 OPS. Don't look at Yordan Alvarez's 2020 numbers. An ongoing knee injury limited the reigning Rookie of the Year winner to just two games. 2019 saw Alvarez make one of the best 87 game stretches ever, hitting 27 home runs with a .313 average and a 1.067 OPS. His defensive numbers haven't been pretty in the small amount of time he has been in the field.

With the way the playoffs went in 2020, I feel bad doubting the Astros. But, this is still a team that went 29-31, and was bailed out by a terrible division. The White Sox and Blue Jays got better, and the Twins and Rays are still good, hurting their wild card chances. That would mean that winning the AL West would be Houston's best playoff chance, but the A's look prime to repeat. I'm sorry Astros fans, I don't see them making the playoffs.