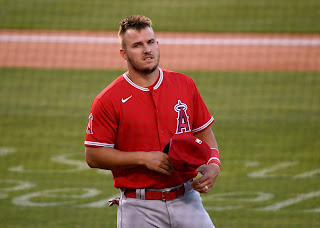 Another year has passed, and Mike Trout has been failed by the Angels organization yet again. They got him a buddy in the lineup when they signed Anthony Rendon last year, but the pitching staff remains poor. Billy Eppler is out as General Manager, but new GM Perry Minasian did little to improve the rotation. Once again, the Angels enter a season outside of the playoff picture.

The Angels did successfully acquire a productive starter last offseason, I'll give them that. The pitcher was Dylan Bundy, who had a career season after leaving Baltimore. Bundy struck out 72 batters in 65.2 innings, with a 3.29 ERA and a 2.95 FIP. Bundy lowered his walk rate to 6.4%, while his slider had a 50% whiff rate. Andrew Heaney had an ERA+ over 100 for just the third time in his career, finishing with a 4.46 ERA and 70 strikeouts in 66.2 innings. The pitch formerly known as his sinker converted to his fastball, although the spin rate did drop. Your American League Gold Glove award winner at pitcher was Griffin Canning, a 24 year old who combined the good defense with a 3.99 ERA and 56 strikeouts in 56.1 innings. Batters had a 47.1% whiff rate and a .142 xBA against Canning's curveball. Coming in from the Orioles is Bundy's old teammate, veteran Alex Cobb. Cobb generally has good control, but his 8 BB% was his worst in the Statcast era. Cobb had a 4.30 ERA, but a 6.49 xERA and a .306 xBA against. His split finger is still effective, but batters hit .353 off of Cobb's fastball. The fifth starter role is a fight between veteran Jose Quintana and 24 year old Jaime Barria. Barria is the better option for both now and the future. He had a 3.62 ERA with 27 strikeouts in 32.1 innings, plus a 3.04 xERA. Barria's main pitch is a slider, which batters hit just .188 against. Quintana is somehow only 32, and he pitched in just four games last year, three out of the Cubs bullpen. In 2019, the lefty had a 4.68 ERA in 171 innings, while batters had an average exit velocity of 90 mph against him. In his 10 innings in 2020, that rose to 94.5 mph. Of course, two-way player Shohei Ohtani is going to start about once a week. Ohtani was awful on the mound in 2020, allowing seven runs and eight walks in 1.2 innings.

The biggest addition to the Angels' roster over the offseason was Raisel Iglesias, the Reds closer who came over in a trade for reliever Noe Ramirez. Iglesias was great in 2020, striking out 31 in 23 innings with a 2.74 ERA and a 2.50 xERA. Iglesias limited batters to a 27.8 hard hit%, with a .300 xSLG, while his slider had a 48.3% whiff rate. He will be a big add to a bullpen that didn't have an effective closer last year. The team had a closing committee in 2020, but with five saves, Ty Buttrey led it. Buttrey was definitely not the team's most effective reliever, however, with a 5.81 ERA and 18 strikeouts in 26.1 innings. His fastball had an average velocity of 96.1 mph, but that was a tick lower than last year. The real star of the bullpen last year was Mike Mayers, who developed a cutter as an effective third pitch, and threw his slider more than before. Mayers had a 2.10 ERA with 43 strikeouts, a .171 xBA and a .298 expected slugging against. Felix Pena transitioned from an opener/bulk pitcher to a standard reliever, and the results improved. Pena had a 4.05 ERA with a 3.00 FIP and 29 strikeouts in 26.2 innings. He limited batters to a 31.2 hard hit percentage. Workhorse lefty Alex Claudio comes in from Milwaukee, where he pitched in 83 games in 2019. He had a 4.26 ERA in 19 innings last year. Where Claudio excels is forcing soft contact, a category where he is one of baseball's best in. Claudio was tied for first in the league with an average exit velocity of 81.7 mph, and he was up there in hard hit percentage at 25.4%. He does this by mostly throwing a low-70s change-up, which batters hit .192 with a 76.3 mph exit velocity against in 2020. The Angels were able to sign Junior Guerra to a minor league deal even after he had two consecutive productive seasons, including 72 appearances as Claudio's teammate in Milwaukee two years ago. In 2020 for the Diamondbacks, Guerra had a 3.04 ERA with a 27.7% hard hit rate. However, he did walk 14.6% of batters. The eighth and final spot is where the competition opens wider. The favorite is six-foot-10 righty Aaron Slegers, who had a 3.46 ERA with a 0.885 WHIP in 26 innings for the Rays in 2020. Slegers only walked five batters, with a 2.7 barrel percentage and a 28% hard hit rate. 2012 first round pick Luke Bard has elite spin rates, with a 2909 rpm spin rate on his slider, and 2720 rpm on his fastball. That hasn't translated to the majors yet, as Bard has a 5.05 ERA with 60 strikeouts in 66 innings. Also in the mix is Rule-5 pick Jose Alberto Rivera, who struck out 95 batters in 75.2 innings for the Astros' Single-A affiliate in 2019.

The Angels entered 2020 with catching as a weaknesses, with Jason Castro expected to start. Castro is now gone, but Max Stassi did a great job hitting last year. Stassi hit seven home runs with a .278 average and an .886 OPS. He also had a 10.5% BB rate, and significantly lowered his K rate. To back him up or start over him, veteran Kurt Suzuki was brought in. Suzuki hit .270 with a .745 OPS for the Nationals last year. He raised his walk rate and only struck out 14.7% of the time, but Suzuki had an average exit velocity of 83.9 mph.

One player who didn't get enough attention last year was Jared Walsh, a left handed first baseman who received Rookie of the Year votes. Walsh hit nine home runs with a .293 average and a .971 OPS. He did this despite an unlucky .256 batting average on balls in play. Walsh can also pitch, but he didn't do that in 2020. In 2019, Walsh allowed one run with five strikeouts in five innings. Lead-off hitter David Fletcher hit .319 with an .801 OPS in 2020, and he can play all around the infield. Fletcher only struck out 10.9% of the time, with just a 6.4% whiff rate against fastballs. Fletcher only has three barrels in 283 career games. Another middle infielder who doesn't strike out often is Jose Iglesias, who had a career season for the Orioles last year, hitting .373 with a .956 OPS. While the Angels lost Andrelton Simmons in free agency, Iglesias is a great defender as well, with two outs above average in 2020. One of his issues was a 2% BB rate. Anthony Rendon had a great first year as an Angel, but the problem was that he doesn't pitch. Rendon started out slow before getting hot mid-way through the season, finishing with a .286 average and a .915 OPS. Rendon walked 38 times, and only struck out 31 times. His line drive rate was a career best 33.5%, which is encouraging. This year looks like it could very well be Albert Pujols' final season. Pujols, who has a .761 OPS in his nine seasons with the Angels, had a career worst .665 mark in 2020. He still doesn't strike out often, with a 15.3 K% last year. It will be interesting to see how the Angels manage having both Pujols and Ohtani at DH, after Walsh's successful 2020. In the best lineup, Pujols might be on the bench. Ohtani did struggle last year, hitting seven home runs with a .190 average and a .657 OPS, while his K rate rose to 28.6%. However, he also walked a career best 12.6% of the time. He has underrated speed, at an average sprint speed of 28.8 ft/s last year. The Angels will carry a utility infielder, but it is between Luis Rengifo and Franklin Barreto to figure out who gets the spot. Both were awful in 2020. Rengifo played in 33 games for Los Angeles last year, hitting .156 with a .469 OPS. Barreto came over from Oakland for Tommy La Stella, then went 2-for-17. If you combine his A's stats, he went 2-for-27. In his career, Barreto has a .549 OPS.

Mike Trout. Oh wait, I can't just write that? Well, anyways, Trout remains the best player in baseball. He hit 17 home runs with a .993 OPS, which actually didn't help his career OPS, which sits at 1.000. Trout is still really fast, but he has given up on attempting to steal bases, with just two attempts last year, one being successful. Trout also had a 93.7 mph average exit velocity with a 55.1 hard hit percentage and a .602 xSLG. Jo Adell was a promising young rookie, but Joe Maddon admitted that he needs more time in AAA after he had a .478 OPS and a -1.3 WAR in his rookie season. So, the team brought in Dexter Fowler as a stopgap in right field. Fowler will be 35 later this month, and has regressed defensively. He had a .706 OPS in 31 games last year, with an 84.5 mph average exit velocity. Fowler also had a career high 27.7 K%. Justin Upton was productive in his first full season with the Angels (2018), but has fallen off since. In  42 games in 2020, Upton hit nine home runs with a .204 average and a .711 OPS. He can still hit the ball hard, with an average exit velocity of 91.7 mph. Also, hit 25.9 K% wasn't great, but it was also his best since 2015. A first rounder back in 2015, Taylor Ward can play the outfield as well as corner infield. Ward hit .277 with a .716 OPS in 34 games last year, with a 91.1 mph exit velocity and a 47% hard hit rate. His main competition at fourth outfielder are non-roster invitees Juan Lagares and Jon Jay. Lagares played in two games for the Mets last year, but never came to the plate. Jay appeared in 18 games for Arizona, finishing with a .451 OPS.

The Angels had another disappointing offseason, and while maybe wanting Trevor Bauer was a reach, they had to do better than Cobb and Quintana. Jake Odorizzi could still come over, but now it feels like the Angels are done. If so, then Trout will be wasted for another year, as a solid lineup is hurt by a mediocre bullpen and bad rotation. The Angels will not make the playoffs once again.