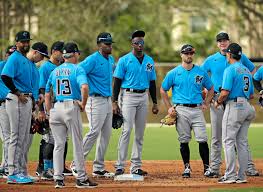 The Marlins' 2020 season was a chaotic mix of things good and bad for baseball. On the good side, an underdog team making the playoffs in a tough division, then winning a playoff series with a cast of misfits was fun to watch. Plus, hiring Kim Ng as GM in the offseason was the progressive and deserved hire that baseball needed. But, the coronavirus outbreak in the beginning of the season cast a negative light in baseball, and the idea of winning without spending shouldn't get in anyone's head. The Marlins did make some traction in the offseason, improving their bullpen to try to prevent them from losing ground in a tough NL East.

The young Marlins rotation returns, and Sandy Alcantara is still the ace. He made just seven starts in 2020, but he had a 3.00 ERA in 42 innings. He struck out 39 batters, for a career best 8.4 K/9. Alcantara throws a high-90s sinker with a lot of vertical and horizontal movement. The sinker helped lead to a 50.4 ground ball percentage, and had a .179 average against. Pablo Lopez was the only Marlin to make more than seven starts, with 11. Lopez had a 3.61 ERA, and struck out 59 batters in 57.1 innings. Lopez limited batters to an 85.7 mph average exit velocity, and he had a 3.16 xERA. His best pitch is a high-80s changeup, which had a .197 xBA and a .292 xSLG against. While JT Realmuto is the best catcher in baseball, Sixto Sanchez did his best to make Phillies fans wish they hadn't traded him for Realmuto. Sanchez finished 7th in Rookie of the Year voting, with a 3.46 ERA over seven starts. His fastball had an average velocity of 98.5 mph, and his changeup had a .148 average against, and didn't allow a single extra base hit while striking out 18. 2017 Rule 5 draft pick Elieser Hernandez showed why the Marlins kept him, striking out 34 and only walking five in 25.2 innings, with a 3.16 ERA. His slider was great even when he struggled in previous years, and it had a .114 average against and a 39.3% whiff rate last year. One small concern is a spike in average exit velocity, up to 91.8 mph. The fifth starter role is an open competition. Lefty Trevor Rogers struck out 39 batters in 28 innings with a 3.53 xERA, but he had a 6.11 ERA and could start in AAA. The player with the best odds is non-roster invitee Gio Gonzalez, who mainly was in the Chicago bullpen last year, but struck out 34 batters in 31.2 innings. He limited batters to an average exit velocity of 86.3 mph. Both Gonzalez and Rogers walked at least 10% of batters. 24 year old Nick Neidert was great in the 2019 Arizona Fall League, with a 1.25 ERA in five starts. He debuted last year, allowing five runs in 8.1 innings.

The Marlins had 28 pitchers come out of the bullpen last year amid the COVID outbreak, but they tried to make sure that they don't fall down that hole again in 2021, making a lot of bullpen additions. The closer role isn't set at the moment, but the favorite is Anthony Bass, who saved seven games for the Blue Jays last year. Bass had a 3.51 ERA and 21 strikeouts in 25.2 innings, which doesn't seem special. But, he had a 2.07 xERA with a .172 xBA against and a slider with a 52.2% whiff rate. The slider was balanced out by the unusually low 8.7% whiff rate on Bass' sinker. The Marlins picked up Yimi Garcia before 2020 after the Dodgers non-tendered him, and it was definitely worth it. Garcia allowed just one run in 15 innings for a 0.50 ERA, while striking out 19. Batters hit just .125 with a 36.4% whiff rate against Garcia's fastball. Coming over from the Dodgers about a month ago is Dylan Floro, who had a 2.59 ERA in 25 games last year. Floro walked just 4.1 percent of batters, and he limited batters to an 84.6 mph average exit velocity with a 26.7% hard hit rate. His 3.33 xERA in 2020 matches his career ERA. The Marlins purchased James Hoyt from Cleveland a week into the season, when they were panicking over their outbreak. He turned out to be great, striking out 20 in 14.2 innings with a 1.23 ERA. He is primarily a slider pitcher, a pitch that had a 42.4% whiff rate despite little horizontal break. Another acquisition from that panic was lefty Richard Bleier, who has struck out just 95 batters in 191 career innings. Between his time in Baltimore and Miami last year, Bleier had a 2.16 ERA and an 86 mph average exit velocity. Recent bullpen addition John Curtiss walked just three batters in 25 innings for the Rays last year, striking out 25 with a 1.80 ERA. One reason why the Rays might have traded Curtiss is that he is prone to allowing hard contact, with a 92 mph exit velocity and a 42% hard hit percentage. Submariner Adam Cimber is good at forcing ground balls, with a GB% over 50% in all three of his seasons. He had a 2.83 xERA and a .203 xBA last year. Cimber is a rare righty specialist, with right-handed batters having a .650 OPS against Cimber, but lefties having a .954 OPS against him. Veteran Ross Detwiler is back for his 13th season, and 2020 was his first productive season since 2014. Detwiler had a 3.20 ERA with 15 strikeouts in 19.2 innings for the White Sox last year. He made his slider a primary pitch, something that was barely present in 2019. The pitch had a .194 xBA and a 33.3% whiff rate. The final spot in the bullpen is up for grabs. Swingman Daniel Castano made six starts and came out of the 'pen once last year, and had a 3.03 ERA in 29.2 innings, but only struck out 12. There are definitely concerns, as batters had a .288 xBA against Castano, who also had a 5.24 xERA, but he gives them length. Rule 5 pick Zach Pop hasn't pitched since May of 2019, when he had Tommy John surgery. In his minor league career, Pop has a 1.34 ERA with 80 strikeouts in 80.1 innings.

The 2021 season is going to force the Marlins to make a decision on Jorge Alfaro. Alfaro is a terrible pitch framer, and he struck out 36% of the time while only walking at a four percent rate. In 31 games, Alfaro hit three home runs with a .226 average and a .624 OPS. Alfaro has failed to reach a 100 OPS+ in his three years in Miami. Backup Chad Wallach had a .640 OPS in 15 games last year, and became the starter in the playoffs, but went 1-for-14. Non-roster invitee Sandy Leon is good defensively, and could beat out Wallach.

Jesus Aguilar had the bounce back season that the Marlins were betting on, hitting eight home runs with a career high .277 average and an .809 OPS. He cut down his strikeout rate to 18.5%, while walking over 10 percent of the time. Aguilar was terrible defensively, with -5 outs above average. Aguilar will split time at first with Garrett Cooper, who can also be the backup corner outfielder. Cooper hit six home runs with an .853 OPS and a 130 OPS+. Cooper also had a .303 xBA. The second base job is an open competition, likely between Isan Diaz and Jazz Chisholm. Both are young but have failed to produce at the major league level. Diaz opted-out of the season during the outbreak, but came back after the trade deadline. In his 56 game MLB career, Diaz has a .174 average and a .545 OPS. Acquired from Arizona for Zac Gallen in 2019, Chisholm is supposed to be the shortstop of the future. In 21 games last year, he hit two home runs, stole two bases and had a .563 OPS. He hit 21 home runs and stole 16 bases at AA in 2019. The unofficial team leader, Miguel Rojas can hit for average, doesn't strike out, and starting in 2020, walks. Rojas hit .304 with an .888 OPS in 2020, with a 12.6 K% and an 11.2 BB%. He is also a good defender, with three outs above average at shortstop, while also playing third and first base. The team's WAR leader last year was Brian Anderson, who moved back to third base full-time as Martin Prado left. Anderson hit 11 home runs with an .810 OPS. He also improved defensively, with three outs above average. Anderson's strikeout rate increased to 28.8%. Utilityman Jon Berti stole nine bases while playing multiple infield and outfield positions. Berti had a 29.3 ft/s sprint speed, and a 15.4 BB%. For the second consecutive season, he had an above-average OPS+, at 105 last year.

When the Marlins acquired him at the trade deadline, Starling Marte was having a great season, with five stolen bases, a .311 average and an .827 OPS. However, he struggled in 28 games after the trade, stealing five more bases, but hitting .245 with a .701 OPS. Marte actually played in 61 games thanks to the trade. He is a great defender, with five combined outs above average. Left fielder Corey Dickerson had a 94 OPS+ in 2020, which was actually a career low for him. He lowered his K% to 16.7 and raised his walk rate to 7.1%. One concern for Dickerson is a career low 85.7 mph exit velocity. Adam Duvall comes over from the rival Braves. He has great power, and he showed that by hitting 16 home runs with an .833 OPS. Duvall had a 43.5% whiff rate against breaking balls, but had a .646 slugging versus fastballs. The fourth outfielder spot is a fight between Lewis Brinson and Magneuris Sierra, who where both acquired for star outfielders. Expectations were high after Brinson came over from Milwaukee for Christian Yelich, but he has been very disappointing. The 26 year old had his best season in 2020, but all he did was hit three home runs with four stolen bases and a .636 OPS. Brinson is really fast, but not on Sierra's level. Acquired in the Marcell Ozuna trade, Sierra had a 28.9 ft/s sprint speed last year, which was actually a career worst. He swiped four bags with a .697 OPS in 19 games last year.

While they were successful last year and only got better in the offseason, the Marlins are still looking up at the rest of the NL East. Their payroll has handicapped them yet again, and with the improved Mets and the dominant Braves still present, returning to the playoffs looks really hard for them. Saying they are a last place team is a little bit harsh, but the Marlins aren't a playoff team.