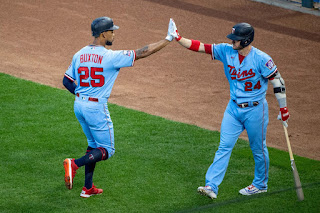 Expectations were so high for the Twins in 2020, after the team hit an MLB record 307 home runs in 2019, and then added Josh Donaldson at third base. So when the offense was good, but not crazy good, people were disappointed. Still, the Twins saw some big improvements in their pitching staff, and beat out the White Sox to win the AL Central. Like most recent Twins offseason, they didn't throw hundreds of millions of dollars around, but they did a nice job re-shaping their roster amid some free agent departures.

The MVP of the Twins in 2020 was Kenta Maeda, even though WAR may not show that. In his first year after coming over from Los Angeles, Maeda finished 2nd in AL Cy Young voting, with a 2.70 ERA and 80 strikeouts in 66.2 innings. Maeda allowed just 40 hits, and combined with his 4% BB rate, he led the league with a ridiculous 0.750 WHIP. Maeda limited batters to a 24.7% hard hit percentage. Maeda took the ace role away from two-time all-star Jose Berrios, who was extremely mediocre in 2020. Berrios had a 4.00 ERA with 68 strikeouts in 63 innings, and to illustrate his mediocrity, his K%, exit velocity, xERA and barrel percentage were all in the 40-60 percentile range. Six-foot-seven, 280 pound righty Michael Pineda has been plagued by injuries and suspensions throughout his career. In five starts after a PED suspension in 2020, Pineda had a 3.38 ERA with 25 strikeouts in 26.2 innings. He limited batters to an 86 mph average exit velocity, and "Big Mike" had a .119 average against with a 46.2% whiff rate on his slider. When Rich Hill left for Tampa Bay, the Twins replaced him with another lefty that could call young and uh, promising, in JA Happ. Despite always making every Yankee fan mad, Happ was very productive in 2020, with a 3.47 ERA and a 3.30 xERA. Happ also had a 1.054 WHIP, and batters hit .135 against his changeup. He is one of those pitchers that is heavily dependent on getting called strikes on the corner, so a batter's umpire could ruin the home run prone Happ. Matt Shoemaker was great in five starts in 2019, but tore his ACL before we could see him stand out. Shoemaker couldn't get back to where he was in 2020, with a 4.71 ERA in 28.2 innings, which is conveniently the same amount of innings he threw the year before. His sinker got bombed, with a .370 average and an .815 slugging against. The Twins bringing in Happ and Shoemaker will force Randy Dobnak to move to the bullpen. Dobnak had a 4.05 ERA through 10 starts, but only had 27 strikeouts in 46.2 innings. Dobnak mainly throws a sinker, a pitch that had 7.8 inches of vertical movement above average, and helped lead to a 61.7 groundball%.

Even after a down year and the team signing Alex Colome, Taylor Rogers is still expected to be the team's closer, for now. Rogers had 24 strikeouts with nine saves in 20 innings, but he also had a 4.05 ERA and a 1.500 WHIP. Batters hit .366 against Rogers' sinker, and while his slider got worse by a little bit, Rogers oddly stopped using his dominant curveball. Colome was great for the rival White Sox, allowing just two earned runs in 22.1 innings for a 0.81 ERA. He didn't allow a home run all year, and limited batters to a .295 xSLG. Over the past three years, Colome's K% has progressively decreased, down to 17.8% in 2020. After a career season in 2019, Tyler Duffey was able to continue his success into 2020, as he had a 1.88 ERA and 31 strikeouts in 24 innings. Duffey's primary pitch is actually a curveball, which had a .146 average against and a 41.6% whiff rate. The clear X-factor of the Twins bullpen is Hansel Robles, who can differentiate the 'pen from mediocre to above-average. Robles was great as the Angels' closer in 2019, with a 2.48 ERA and 75 strikeouts in 72.2 innings. But, he allowed 19 earned runs with 20 strikeouts in 16.2 innings in 2020. A big sign of his decrease was that his fastball lost two miles an hour and 100 rpm, and batters slugged .742 against it. Lefty Caleb Thielbar is dealing with a back injury but shouldn't miss too much time. Thielbar had a 2.25 ERA with 22 strikeouts in 20 innings last year in what was his first season since 2015. He was great at limiting hard contact, with a 25.5 percent hard hit percentage. In his first full season after a two game cameo in 2019, 25 year old righty Jorge Alcala succeeded, with a 2.63 ERA and 27 strikeouts in 24 innings. Batters had a .364 xSLG and a 32.2 hard hit percentage against Alcala, whose fastball averaged 96.9 mph. In 15 innings in 2020, Cody Stashak limited batters to a .204 average and a .635 OPS. He also had a 3.00 ERA and 17 strikeouts. Stashak's best pitch in a slider, which had a 44.4% whiff rate. If Thielbar misses time, Australian Lewis Thorpe could make the team. Thorpe has had a strong start to Spring Training, but he was awful in 2020. Thorpe had a .304 xBA and a 7.64 xERA last year. Also an option is Shaun Anderson, who had a 3.52 ERA in 15.1 innings for the Giants last year. Anderson has a really good slider with a high-spin fastball.

Mitch Garver was elite in 2019, hitting 31 home runs in 93 games. But, he only had 81 Plate Appearances last year, and was not the same hitter. Garver had a .511 OPS, and struck out 37 times, or over 45 percent. One reassuring thing for Twins fans is that Garver's extreme hard hitting skills in 2019 didn't get worse, as he had an average exit velocity of 92.4 mph, and a 50 hard hit percentage. Drafted in the second round in 2018, Ryan Jeffers had a promising first 26 games, and didn't lose his rookie eligibility. Jeffers had a .791 OPS, although he struck out 30.6 percent of the time. The Twins could carry a third catcher in Willians Astudillo, who can play third base, corner outfield and first base. Astudillo has a career .294 average, and only 20 of his 317 career Plate Appearances have ended in a walk or strikeout.

After a move to first base, Miguel Sano did what he does best offensively: hit the ball hard and strikeout a ton. Sano had an amazing 95.2 mph average exit velocity, and a 57.3 hard hit percentage, both being insane. But, Sano struck out 90 times, the most in the MLB. His K% was 43.9%, which is absolutely terrible. Sano's 8.8 BB% was a career low. Just like with Sano a year ago, Jorge Polanco will have to move from the left to the right side of the infield because of an offseason signing. Polanco's breakout in 2019 earned him an all-star appearance, but he slumped in 2020. He hit four home runs and stole four bases with a .658 OPS. Polanco only struck out 15.5% of the time, but also only walked 5.8% of the time. The shortstop moving Polanco to second is Andrelton Simmons, who is the best defender of our generation. Simmons only struck out 12.6% of the time, and has been in the top ten percent of players in K% every year since 2015. While he had -1 outs above average in 30 games in 2020, Simmons had 19 in 2019, 16 in 2018 and 18 in 2017, which are all amazing numbers. Josh Donaldson played in just 28 games in his first season as a Twin, but walked 17.6% of the time with a 92.8 mph average exit velocity. Donaldson had an .842 OPS, which was highly elevated by his high walk rate. Since joining the Braves in 2019, he has improved a lot defensively, with 12 total outs above average. With Marwin Gonzalez and Ehire Andrianza gone in free agency, Luis Arraez will move to the super-utility role. He is not a great defender, but Arraez has a .331 average in his career, with just an 8.2 K%. He has actually walked four more times in his career than he has struck out. Arraez hit over .300 against fastballs, breaking balls and offspeed pitches last year.

German power hitter Max Kepler did regress after a career season in 2019, but his .760 OPS was still above-average. Kepler still struck out under a 20% rate, and walked over a 10% rate, which is definitely acceptable. He also had an above average 28.1 ft/s sprint speed, with one out above average in right field. Kepler can also play center field when Byron Buxton is sitting or injured. Buxton is of course an elite speed-and-defense player, with a 30 ft/s sprint speed and five outs above average last year. He has improved a lot offensively over the past two seasons, and hit 13 home runs with an .844 OPS in 2020. However, Buxton just walked twice all year. The biggest regret of the Twins' offseason should be non-tendering Eddie Rosario, especially since no one was brought in as a replacement. The starting left fielder will be a platoon between Jake Cave and Brent Rooker. Cave was productive from 2018-19, but had a .674 OPS in 42 games in 2020. Cave increased his strikeout rate extremely, to a problematic 35.8 percent. Cave can play all three outfield positions, and was effective there, with three outs above average. Rooker, a 2017 1st round pick and owner of this amazing take, played in seven games in 2020, and went 6-for-19 with a .960 OPS. At AAA in 2019, Rooker hit 14 home runs with a .933 OPS in 65 games. MLB Pipeline's 26th best prospect in baseball is Alex Kirilloff, who debuted in the playoffs last year, and went 1-for-4. Kirilloff can play corner outfield and first base, and has hit 36 home runs with a .317 average and an .863 OPS in 279 career MiLB games, although he has not played above AA. Nelson Cruz had another amazing season, and the Twins brought him back after letting him reach free agency. Cruz hit 16 home runs with a .303 average and a .992 OPS. His average exit velocity dropped under the top ten percentiles for the first time in the Statcast era, but at 91.6 mph, that is still great. Cruz slugged .755 against fastballs.

The Twins may not look like a powerhouse, but they are an all-around, solid team. The rotation, bullpen and lineup all have potential. There is a lot of competition for the playoffs, both in the AL Central and the other two American League divisions, but I think that the Twins will pull it off, and make the playoffs again in 2021. Will they finally win a playoff game? Well, I can't go that far yet.