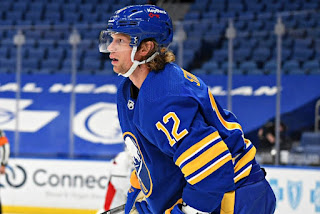 The Montreal Canadiens have acquired forward Eric Staal from the Buffalo Sabres in exchange for a 2021 third round draft pick and a 2021 5th round pick. The Sabres also retained $1.625 million, or 50% of Staal's salary.

This is act one of the everything must go sale for another Sabres rebuild. Staal was the second biggest name expected to be traded, behind winger Taylor Hall. Like every other member of the Sabres, who currently have a 15 game losing streak and a .250 points percentage, Staal has had a pretty terrible season. While he is sixth on the team in points, he is on his way to a career low point total, as Staal's 0.31 points per game is a career worst. The veteran is good at face-offs, although his 48% win rate on them right now is low for his standards. He can play on the power play, and boost Montreal's bottom-six as they try to finish in the top four in the North Division. He has just a 5.1 shooting percentage and a 91.5 PDO, so things can easily get better. Staal's 51.2 CF% is well above his old team's average. We will probably see a lack of trades between American and Canadian teams because of the mandated quarantine time between borders, but that was limited to just seven days from 14 earlier today for NHL players, which helps Staal and the Canadiens out. Both teams win here, as the Sabres get a decent mid-round pick and a mid-to-late-round pick for Staal, who was going to leave as a free agent after this season, and the Canadiens get a good bottom-six player for under $1.7 million (after retention), and they still have two third round picks and two fifth round picks in this year's draft.

Staal, 36, scored three goals with seven assists for 10 points in 32 games for Buffalo this year. In his NHL career for the Sabres, Minnesota Wild, New York Rangers and Carolina Hurricanes, Staal has scored 439 goals with 592 assists for 1031 points in 1272 games.