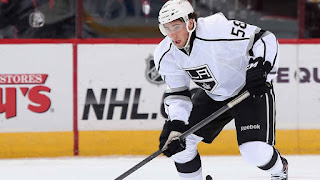 The Ottawa Senators have acquired forward Michael Amadio from the Los Angeles Kings in exchange for defenseman Christian Wolanin.

This is merely a swap of depth players between the two NHL teams closest to the salary cap floor. This is not a big NHL trade, but both players have a good amount of NHL experience with AHL success. Both have also played a good amount of time in the NHL this year. Wolanin was recently waived by the Senators, and cleared. When he gets to Los Angeles, Wolanin could easily become their new seventh defenseman. The Kings only have six defenseman on their roster, but three on their taxi squad, which is also a place where Wolanin could go. He is a better option than Austin Strand and Daniel Brickley, who do not have a ton of NHL experience. Wolanin probably would be below recent first rounder Tobias Bjornfot on the depth chart. He is still relatively young, and the former 4th round pick has had trouble breaking into Ottawa's starting lineup after success at the University of North Dakota and the AHL.

The Senators do not have a shortage of young, or at least capable NHL forwards, so Amadio will have to work his way up. A 3rd round pick in 2014, he has struggled in a good amount of NHL time this year, and last played in the NHL on March 14th. Since then, Amadio has spent some time playing for the AHL's Ontario Reign. Starting in Belleville (Ottawa's AHL affiliate) seems like the most likely situation for Amadio right now. He is a couple of years younger than Wolanin, and can play on the Senators' fourth line.