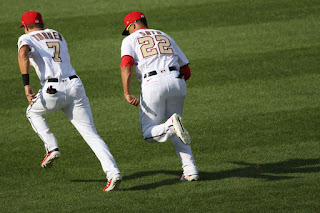 We are finally at the end of my season previews for 2021. This year, the Nationals do not have their roster all official by the time I finished my preview for them, since I started these a week earlier than I normally do. For the team themselves, they really disappointed, as the reigning World Series champions finished in last place, while playing in the same division as the Phillies and their bullpen. You would think that this could just be a 60-game blip, but there are enough reasons to believe that Washington may not recover.

The rotation entered 2020 as Washington's strength, but it oddly became a weakness as the season progressed. Three-time Cy Young winner and future Hall-of-Famer Max Scherzer finished outside the top-5 in Cy Young voting for the first time since 2012. Scherzer didn't even receive a vote, as he had a 3.74 ERA with 92 strikeouts in 67.1 innings. He had a 4.33 xERA, with an uncharacteristically high 9.4 H/9. His 7.8% BB% was a big raise from 2019. Scherzer's velocity on his pitches stayed the same, but he is 36 years old, so age could play a role in his deterioration. The one slumping player who I am worried about is Patrick Corbin. Corbin's sinker and fastball velocity decreased to just over 90 mph last year, while his slider's whiff rate dropped by over 10 percent. The high-strikeout pitcher had just 60 Ks with a 4.66 ERA in 65.2 innings. No National League pitcher allowed more hits than Corbin, who allowed 85, for an 11.6 H/9. He had a 5.17 xERA while batters had a .289 xBA against Corbin. The first season of Stephen Strasburg's seven year, $245 million contract was a waste, as he made just two starts and missed the rest of the season with a hand injury. He had just two strikeouts while allowing six runs over five innings in those two starts. Strasburg has had a calf issue this Spring Training, but he should not miss any regular season time. His last healthy action was in 2019, when he won World Series MVP, and had a 3.32 ERA with 251 strikeouts in a league leading 209 regular season innings. Since the rotation wasn't already old enough, Jon Lester was brought in. Lester lead the NL in wins in 2018 (take what you want from that), but has not been good in 2019 or 2020. He had just 42 strikeouts in 61 innings with a 5.16 ERA for the Cubs. He had a 12.3 barrel percentage and a .517 xSLG against. Lester's high-80s fastball was extremely awful, with a .767 xSLG against and an 8.2 whiff rate. The big rotation fight will come with the fifth spot, as there are multiple candidates. Erick Fedde had a 4.29 ERA in 11 games (eight starts), but he struck out just 28 in 50.1 innings, for an awful 12.6 K%. Fedde throws a sinker that had just a 1836 rpm with a 7.6 percent whiff rate, and his highest whiff rate on a pitch was 28.1%. Joe Ross was the favorite for the fifth starter spot last year before he opted-out of the season. He split time between the rotation and bullpen in 2019, and did not pitch well, with a 5.48 ERA and 57 strikeouts in 64 innings. He had an 87.5 mph average exit velocity against, although he also walked 11.2 percent of batters. Since Ross didn't pitch last year, he could start out in the bullpen. Austin Voth is also an option after he was pretty good in limited time in 2019. Voth could not carry that over to 2020, as he had a 6.34 ERA with 44 strikeouts in 49.2 innings. His 5.52 xERA was an improvement, but still not very good. He also had a pretty bad 1.510 WHIP.

Veteran catcher Yan Gomes won back the starting catcher job from Kurt Suzuki, who left in free agency. Gomes had a .787 OPS and a 107 OPS+, while his .286 xBA and 18.3 K% were big improvements on previous seasons. Gomes still only hit four home runs in 30 games, but that is actually a 20 homer pace in a 150 game season, so don't read too much into that. He was not a good pitch framer. Alex Avila has had an odd mix of good and bad offensive seasons, but he has caught three of the Nationals' four main starters (Scherzer in Detroit, Corbin in Arizona, Lester in Chicago, credit to MLB.com for that stat). In 23 short games for the Twins last year, Avila was on the bad side of his hitting spectrum, with a .184 average and a .641 OPS.

The big trade of Washington's offseason was when they acquired Josh Bell from Pittsburgh. Bell had a great start to 2019, and finished with 37 home runs and an all-star appearance. He tailed off towards the end of the season, and that carried over into 2020, as he hit eight home runs with a .226 average and a .669 OPS. The switch hitter had a career high 26.5 K%, with a career low 9.9 BB%. Bell still did hit the ball hard, with an average exit velocity of 91.7 mph. Returning for his 16th season in D.C. is Ryan Zimmerman, who has been the greatest position player in franchise history, and by WAR he actually is first since the team moved from Montreal, just barely edging out Scherzer. The 4th overall pick in 2005 opted-out of the 2020 season, and after the way his 2019 season went, Zimmerman will be a bench bat and backup to Bell at first. He hit six home runs with a .736 OPS in 2019. In the Statcast era, Zimmerman has a 92 mph average exit velocity. Four time all-star Starlin Castro broke his wrist early on in 2020, and never returned. He was playing fine in his first 16 games, with a .754 OPS. One area where Castro needs to improve is getting on base, as he had a .300 OBP in 2019 despite a decent .270 average. He has never won a Gold Glove, but the former shortstop is a good defensive second baseman. He had two outs above average in 2020, and nine in 2019. Trea Turner received MVP votes for the first time in his career, as he had a league leading 78 hits with a .335 average, a .986 OPS and 12 home runs while also swiping 12 bags. Turner had an elite sprint speed of 30.1 ft/s. Turner's average sprint speed has never dropped below 30. Turner also had a career best K% of 14.2 percent. Carter Kieboom was a top prospect, and the Nationals depended on him after Anthony Rendon left in free agency. So far, he has not followed through, as Kieboom hit .202 with a .556 OPS in 33 games. He did have a solid 14.4 walk rate, and he had a .902 OPS at AAA in 2019. Josh Harrison, who should be a lot older than 33, is entering his second season with the Nationals. He played corner outfield, second and third base last year. Harrison had a 105 OPS+ in 33 games, which was actually the second base in his career. While he only struck out 13.2 percent of the time, Harrison does not hit the ball hard, with an 83.8 mph average exit velocity. 20 year old Luis Garcia took over at second base when Castro was injured, but he had a .668 OPS, meaning that he could use some more minor league time. Garcia had just an 83.5 mph exit velocity, a 3.6 walk rate and -7 outs above average.

While his -2 outs above average may have stopped him from leading the team in WAR, Juan Soto showed just how ridiculous he is. Soto hit 13 home runs in 47 games, and led the National League with a .351 average. Soto's .490 OBP, .695 slugging and 1.185 OPS all led the Major Leagues. He had a 17.9 barrel percentage, with a .697 xSLG. He struck out just 14.6 percent of the time, with an insane 20.8 walk rate. Soto's on-base was the best since Barry Bonds set the all-time record in 2004 (.609). The next best OBP since 2009 was also in 2020, as Freddie Freeman had a .462 OBP. Plus, Soto turned 22 in October. That is one year younger than Victor Robles, who had a solid 2019 rookie season before regressing last year. Robles hit three home runs with four stolen bases and a .608 OPS. His sprint speed dropped by over one ft/s, and he had an awful 82.2 mph average exit velocity, with a 22.9 hard hit percentage. Robles had just a .280 xSLG. Robles had three outs above average, and with Soto and new acquisition Kyle Schwarber in the corners, he will need to be elite defensively. Schwarber hit 38 home runs with an .871 OPS in 2019, but he did not carry that over to 2020, as he hit 11 home runs with a .188 average and a .701 OPS. Schwarber's 29.5 K% was his worst since 2017, although he did have an increased 13.4 percent walk rate. He also had a 92.8 mph average exit velocity. Schwarber had -4 outs above average in left field, and is so bad defensively that the Nats would rather move Soto over to right field than experiment with Schwarber in right. Gerardo Parra's "Baby Shark" walk-up song was a fan favorite when the team won the World Series in 2019, but he spent 2020 in Japan. Back in Washington on a minor league deal, Parra had a .688 OPS for Yomiuri last year. He stole six bases with a .747 OPS while playing all three outfield positions and first base for the team in 2019. Andrew Stevenson followed up being great in a very small sample size in 2019 (.953 OPS in 30 games) by being, well, great in a very small sample size. The left-handed hitting outfielder hit two home runs with two stolen bases and a 1.179 OPS in 15 games.

The Nationals have a lot of big questions entering 2021, so it would be easier to go over what isn't a question, and Soto and Turner are basically it. The rest of the lineup is not great, the bullpen is not elite, just average, and the rotation, the guiding force in 2019, is aging. If Scherzer, Corbin and Strasburg cannot all regain their old form, then the team will be in trouble. They are not completely out of the playoff picture, but the Braves and the resurgence of the Mets will hurt their chances. As of now, they are not a playoff team.