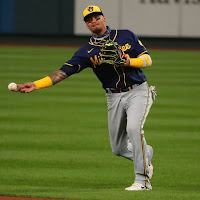 The Atlanta Braves have acquired shortstop Orlando Arcia from the Milwaukee Brewers in exchange for RHPs Chad Sobotka and Patrick Weigel.

There is probably going to be a person out there that sees Arcia's 1-for-11 start to 2021 and draws a conclusion that the Brewers had given up on the player afterwards. Well, the real reason stems from the end of Spring Training. As seen on Opening Day, former Padres top prospect Luis Urias had won the starting shortstop job, moving the former starter, Arcia, to the bench. Arcia had a 96 OPS+ in 2020, and that was a career high. He has some power and speed, but overall he is not a starting-caliber player. Oddly enough, he is the youngest player in this trade. The Brewers sell him for Weigel and Sobotka, two tall right-handers. Both have MLB experience, but Sobotka is the interesting one. He has struggled in minor MLB stints, aside from a productive 14 game run in 2018. But, Sobotka has maintained his strikeout ability in the majors and minors, and in 2019 his fastball averaged 96.1 mph with a 2499 rpm spin rate. His slider also had an elite 2959 spin rate. Weigel has just one game of MLB experience, and he had good numbers at AAA in 2019. The Brewers have had interest in him since 2014, when they drafted Weigel in the 22nd round, although he did not sign. Both pitchers will go to Milwaukee's alternate training site, but could be a future bullpen option.

With Arcia in Atlanta, you have to wonder what this means for the futures of Johan Camargo and/or Pablo Sandoval. One will surely be gone if Arcia is now on the roster. Camargo can play multiple infield and outfield positions, and he is a switch hitter. But, he had a .611 OPS in 35 games last year. Also a switch hitter, Sandoval is 1-for-2 with a home run this year, but he does not give the Braves any defensive flexibility besides at third base. Expect one of them to be gone with Arcia stepping in as a backup to Dansby Swanson. His .279 xBA and 16.9 K% in 2020 were career highs. He is also an above average defender.