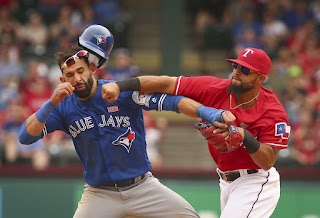 The New York Yankees have acquired IF Rougned Odor and cash considerations from the Texas Rangers in exchange for OF Antonio Cabello and OF Josh Stowers.

Right off the bat, this is a really confusing trade for New York. Odor has hit 30 home runs in three seasons, including 2019, but in 2019 he also struck out a league leading 178 times with a .721 OPS. He also has a deplorable .289 OBP, something that the Yankees will want to fix. He has been an above average defender at second base in the past, but second is also the only position he has ever played in a big league game, despite playing some third base this Spring. The Yankees could test his versatility by trying out Odor at shortstop or first base. If he can play the former, it could push Tyler Wade out of the 26 man roster. While the Rangers will eat up most of the $27 million owed to Odor over the next two seasons, his recent play has not been worth giving up two prospects. He had a .192 xBA, a 31.8 K% and a 4.7 walk rate on one of baseball's worst teams last year, and couldn't make the team this year.

The Rangers do a pretty good job here. They knew that trading Odor would require eating up just about all the money, but they save a little bit of it by trading him and not just paying all $27 million, but most of it. They also get two prospects back. Cabello was a big international signing for the Yankees in 2017, but he struggled in 2019 in the Appalachian League, and has not even reached Low-A. Stowers was acquired in the second Sonny Gray trade, although technically not, as the Yankees immediately flipped Shed Long, acquired for Gray, to Seattle for Stowers. A 2018 2nd round pick after he had a .974 OPS at the University of Louisville. He had a nice season at Single-A in 2019, and could move up to AA this year.