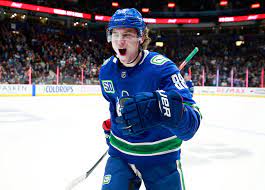 The Chicago Blackhawks have acquired forward Adam Gaudette from the Vancouver Canucks in exchange for forward Matthew Highmore.

From Vancouver's point of view, this is a confusing trade. Gaudette has not had good underlying numbers in his NHL career and is not good at face-offs, but he is young and scored 12 goals last year. He has fallen back to earth after a 16 shooting percentage last year, and has been a replaceable 4th liner. But he had potential coming out of college, scoring 30 goals with 30 assists in 38 games for Northeastern in 2017-18. Looking at the salary cap, they clear up $225k, as Highmore is under contract through next year at $725k, while Gaudette is a pending RFA, making $950k this year. Highmore will be an RFA when his contract expires. The undrafted Highmore has been nothing more than an extra forward in his time with Chicago, averaging under 10 minutes of ice time with little scoring production and no defensive value. It is for sure a confusing deal for the Canucks, unless they really see something in Highmore.

Highmore, 25, has two assists with just 20 shots in 24 games for the Blackhawks this year. In his NHL career, all in Chicago, Highmore has scored four goals with six assists for 10 points in 73 games.

The Blackhawks are not huge winners here, but they do gain some value. Gaudette was a fine player last year, although he did have a very high shooting percentage that showed to be unsustainable this year. But, he is actually younger than Highmore and should not get a big deal as an RFA at the end of this season. He is for sure an upgrade from what they had.