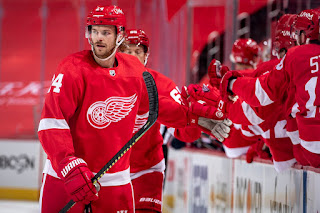 The Montreal Canadiens have acquired defenseman Jon Merrill from the Detroit Red Wings in exchange for a 2021 5th round draft pick and forward Hayden Verbeek. The pick is from Ottawa, acquired by Montreal in January 2020 for Mike Reilly.

The Canadiens get a really good defensive defenseman for cheap here. Merrill is arguably better than Patrik Nemeth, who the Red Wings got a 4th round pick for. Merrill had elite expected goal rates since being picked in the expansion draft four years ago, but that has fallen to 48.31% this year. His defensive numbers have been good, it is just his offensive stats that ruin his xGF%. The Canadiens have a bunch of defensemen, but they waived Victor Mete today, and Merrill will step in as a solid third pairing player. The price is not that high, as Verbeek is not a big prospect. Merrill is a pending UFA with a cap hit of just $925k.

Merrill, 29, has five assists with 58 blocked shots in 38 games for Detroit this year. In his NHL career for the Red Wings, Vegas Golden Knights and New Jersey Devils, Merrill has scored 12 goals with 54 assists for 66 points and 494 blocked shots in 392 games.

The Red Wings are obvious sellers, so the only surprising thing about this trade is who Merrill would be going to. The return is subpar. The 5th rounder will be an early one, as it is from the Senators. Verbeek is an undrafted forward who has spent time between the AHL and ECHL since 2018-19. At this point he is an NHL long shot. He played in Slovakia this year, with two goals in four games.

Verbeek, 23, has one goal with two assists for three points in seven games for the AHL's Laval Rocket this year. In his AHL career, Verbeek has scored five goals with five assists for 10 points in 61 games.