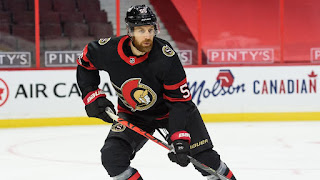 The New York Islanders have acquired defenseman Braydon Coburn from the Ottawa Senators in exchange for a 2022 7th round draft pick.

This would be terrible value for the Islanders if it was anything more than a 7th round pick. Coburn is a below replacement level defenseman at this point in his career, but he can be physical, and won a Stanley Cup last year with the Lightning. Unfortunately his beard will be a victim to Lou Lamoriello's weird rule. Coburn's place on the Islanders depth chart will be unclear. He will likely sit on the taxi squad for the majority of the time, and will either be the 7th or 8th defenseman, fighting with Thomas Hickey for the former. He can kill penalties, but takes way too many of them himself, and his $1.7 million cap hit is a lot, but the Islanders were unlikely to use it anyways, unless it was on another depth defenseman.

Coburn, 36, has two assists with 25 hits in 16 games for the Senators this year. In his NHL career with Ottawa, the Tampa Bay Lightning, Philadelphia Flyers and Atlanta Thrashers, Coburn has scored 49 goals with 185 assists for 234 points with 925 hits in 980 games.

Coburn was not remotely high on Ottawa's depth chart, and was sitting on their taxi squad. He would likely clear waivers, so good on GM Pierre Dorion for getting some value for him.