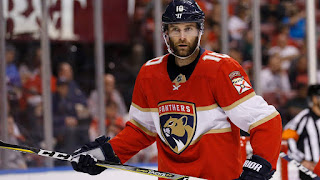 The Chicago Blackhawks have acquired forward Brett Connolly, defenseman Riley Stillman, forward Henrik Borgstrom and a 2021 7th round pick from the Florida Panthers in exchange for forward Lucas Wallmark and defenseman Lucas Carlsson.

The main takeaway for this trade is that the Panthers are clearing up cap space for a bigger move, either this year or in the future. Connolly is in the second year of a four year contract with a $3.5 million cap hit. He earned that deal by being a consistent third line scoring option, with 41 combined goals in the previous two seasons. However, he has not produced for Florida this year. In 21 games, Connolly has just 16 shots, after he had 193 in 69 games in 2019-20. As the Panthers look for a better scoring option and an Aaron Ekblad replacement, this trade helps them, as they did not retain any money. The two sweetener players who they give up are interesting, and both have NHL experience. In return, they get some depth both on offense and on the blue line. Wallmark should be a familiar name for Panthers fans, as he played in seven games (plus two in the playoffs) down the stretch last year after being acquired for Vincent Trocheck. He gives them an extra center, and had double digit goals in the previous two years. Carlsson is a young Swede who was drafted in the 4th round in 2016 by Chicago. He has split time between the AHL and NHL this year.

Carlsson, 23, has one assist in 12 games for Chicago this year, and a goal and two assists for three points in seven games for the AHL's Rockford IceHogs. In his short NHL career Carlsson has no goals and two assists in 18 games.

There were rumors that the rebuilding Blackhawks would be renting out their cap space in exchange for assets, and that is exactly what they did here. Those assets are two players and a 7th round pick. The pick is not a big deal to them, and the other two are not big time prospects. Well, not anymore. Borgstrom was a first round pick in 2016, picked 23rd overall. But he has slumped in limited NHL time and is currently playing in his hometown in Finland. He spent most of last year in the AHL, scoring 23 points in 49 games. He is still an RFA, so Chicago gets his rights. Stillman, like Carlsson, was a 4th round pick in 2016. He is physical, with 78 hits in 43 NHL games, including some this year. He could replace Carlsson in Chicago's defensive cycle. Connolly still is just one year removed from a 19 goal season, so there is still hope. But, Chicago does not get enough back for taking on his full salary.

Connolly, 28, has scored two goals with two assists for four points in 21 games for the Panthers in 2020-21. In his NHL career for Florida, the Washington Capitals, Boston Bruins and Tampa Bay Lightning, Connolly has scored 100 goals with 92 assists for 192 points in 517 games.

Stillman, 23, has no points in eight NHL games and three assists in five games for the AHL's Syracuse Crunch this year. In his NHL career Stillman has no goals and five assists in 43 games.