Having fun with 91: Speaking with captain John Tavares 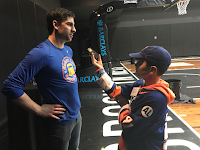 New York Islanders captain John Tavares is one of the best players in the NHL. The Mississauga, Ontario native was drafted first overall in the 2009 NHL draft by the Islanders. Tavares, 26, has 532 points (234 goals and 298 assists) in 581 career NHL games, all with the Islanders. His teammates appreciate playing with him. "He's one of the best players in the league, and in the world. He's fun to play with every night," his linemate, Josh Bailey told me. At his teammate Anders Lee's Kan Jam event, I was able to catch up with Tavares. Here are the questions I asked Tavares.

Me: "How do you feel the team has changed this season from December to right now?"
Tavares: "As a team, we were a little disappointed with the way we started. It's a tight group in a locker room, and there was still a lot of hockey left to play, around 40-50 games. I think there was a lot of belief that we're a lot better than we played, and we've come together and given ourselves a good chance to make the playoffs."

M: "Do you feel a little extra pressure as the captain of this team to lead them into the playoffs?"
T: "I don't think I try to add any pressure. I think the expectations are always high, and there's a lot that people expect from a captain, or from your teammates, or for myself. I just try to be myself [and I] feel like that's what has gotten me to this point, and why the team has felt that I've been deserving of captain. So, I just try to be myself and play as hard as I can."

M: "In the last 10 games, Joshua Ho-Sang has come in and has 6 points. How do you feel like he's changed the team?"
T: "Josh is very skilled, very talented. He is playing hard, being very responsible with what the coaching staff is asking him to do but they want him to play his game and [that's] what has gotten him to this point in his hockey career. He's gone out and he's created a lot of very good offense for us, creating chances and obviously he's been capitalizing on them. It's great to see him get rewarded, he's obviously very talented, he's a good kid."

M: "What do you think of this event that Anders Lee is running?"
T: "As a teammate, you want to support that and obviously it's for a great cause, to fight cancer. No question, we all love being here, supporting Anders, and the cause he's fighting for. It's great to be here, we're all having a lot of fun. It's always great to be around your teammates and our great fans."

M: "Do you have any long term plans to stay here on Long Island?"
T: "I want to play with the Islanders for my whole career, that would be great. Obviously I can't negotiate a new contract until some point this summertime, so I just want to worry about helping this team make the playoffs, and hopefully be here for the long [run]."