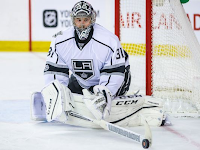 The Dallas Stars have acquired the rights to goalie Ben Bishop from the Los Angeles Kings in exchange for a 4th round pick in the 2017 NHL draft. Let's get into details.

The Stars two goalies, Kari Lehtonen and Antii Niemi, were both awful in 2016-17. Lehtonen had a 2.85 GAA and a SV% of .902. Niemi's GAA and SV% were 3.30 and .892. They missed the playoffs. They badly need a goalie. Bishop has been elite in his career. He can be a free agent on July 1st, but Dallas should sign him. The only problem is that they owe Lehtonen $5.9 mil next year and Niemi $4.5 mil next year, before they both hit free agency. They can't trade those players, and they both have a modified NTC. I expect they'll sign Bishop, and buy out Niemi, and have Lehtonen back Bishop up. Bishop, 30, had a .910 SV% and a 2.54 GAA with the Kings and Tampa Bay Lightning last year, after a trade deadline deal. He has a career GAA of 2.32 and a SV% of .919 in 270 games for the Kings, Lightning, Ottawa Senators and St. Louis Blues. "Ben has proven that he is one of the elite goaltenders in the NHL," Stars GM Jim Nill said in a statement. "This offers us the opportunity to negotiate with him before the free agency period begins."

The Kings didn't need Bishop, with all-star Jonathan Quick on the team. So, to just get value out of him, even just a 4th rounder was a good job by GM Rob Blake. The 4th rounder originally belonged to the Montreal Canadiens, but was acquired by the Stars in a deadline trade for defenseman Jordie Benn.
Posted by Carter at 7:20 PM